Who is the Doctor 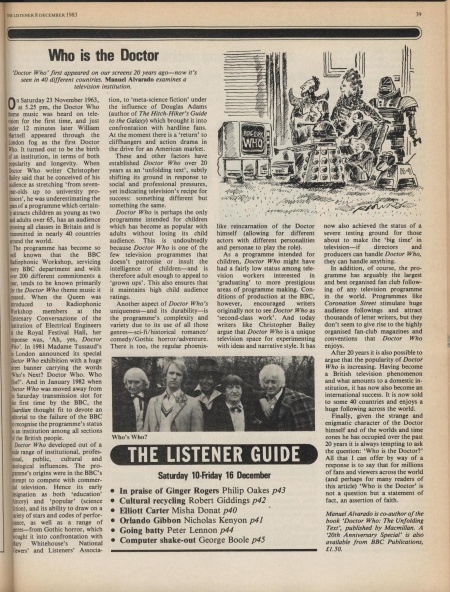 'Doctor Who' first appeared on our screens 20 years ago—now it's seen in 40 different countries. Manuel Alvarado examines a television institution.

On Saturday 23 November 1963, at 5.25 pm, the Doctor Who theme music was heard on television for the first time, and just under 12 minutes later William Hartnell appeared through the London fog as the first Doctor Who. It turned out to be the birth of an institution, in terms of both popularity and longevity. When Doctor Who writer Christopher Bailey said that he conceived of his audience as stretching 'from seven-year-olds up to university professors', he was underestimating the span of a programme which certainly attracts children as young as two and adults over 65, has an audience crossing all classes in Britain and is transmitted in nearly 40 countries around the world.

The programme has become so well known that the BBC Radiophonic Workshop, servicing every BBC department and with over 200 different commitments a year, tends to be known primarily for the Doctor Who theme music it created. When the Queen was introduced to Radiophonic Workshop members at the Centenary Conversazione of the Institution of Electrical Engineers at the Royal Festival Hall, her response was, 'Ah, yes, Doctor Who'. In 1981 Madame Tussaud's in London announced its special Doctor Who exhibition with a huge street banner carrying the words 'Who's Next? Doctor Who. Who Else?'. And in January 1982 when Doctor Who was moved away from its Saturday transmission slot for e first time by the BBC, the Guardian thought fit to devote an editorial to the failure of the BBC to recognise the programme's status as an institution among all sections of the British people.

Doctor Who developed out of a wide range of institutional, professional, public, cultural and ideological influences. The programme's origins were in the BBC's attempt to compete with commercial television. Hence its early designation as both 'education' (history) and 'popular' (science fiction), and its ability to draw on a rariety of stars and codes of perforce, as well as a range of res—from Gothic horror, which brought it into confrontation with Mary Whitehouse's National sewers' and Listeners' Association, to 'meta-science fiction' under the influence of Douglas Adams (author of The Hitch-Hiker's Guide to the Galaxy) which brought it into confrontation with hardline fans. At the moment there is a 'return' to cliffhangers and action drama in the drive for an American market.

These and other factors have established Doctor Who over 20 years as an 'unfolding text', subtly shifting its ground in response to social and professional pressures, yet indicating television's recipe for success: something different but something the same.

Doctor Who is perhaps the only programme intended for children which has become as popular with adults without losing its child audience. This is undoubtedly because Doctor Who is one of the few television programmes that doesn't patronise or insult the intelligence of children—and is therefore adult enough to appeal to 'grown ups'. This also ensures that it maintains high child audience ratings.

Another aspect of Doctor Who's uniqueness—and its durability—is the programme's complexity and variety due to its use of all those genres—sci-fi/historical romance/ comedy/Gothic horror/adventure. There is too, the regular phoenix-ike reincarnation of the Doctor himself (allowing for different actors with different personalities and personae to play the role).

As a programme intended for children, Doctor Who might have had a fairly low status among television workers interested in 'graduating' to more prestigious areas of programme making. Conditions of production at the BBC, however, encouraged writers originally not to see Doctor Who as 'second-class work'. And today writers like Christopher Bailey argue that Doctor Who is a unique television space for experimenting with ideas and narrative style. It has now also achieved the status of a severe testing ground for those about to make the 'big time' in television—if directors and producers can handle Doctor Who, they can handle anything.

In addition, of course, the programme has arguably the largest and best organised fan club following of any television programme in the world. Programmes like Coronation Street stimulate huge audience followings and attract thousands of letter writers, but they don't seem to give rise to the highly organised fan-club magazines and conventions that Doctor Who enjoys.

After 20 years it is also possible to argue that the popularity of Doctor Who is increasing. Having become a British television phenomenon and what amounts to a domestic institution, it has now also become an international success. It is now sold to some 40 countries and enjoys a huge following across the world.

Finally, given the strange and enigmatic character of the Doctor himself and of the worlds and time zones he has occupied over the past 20 years it is always tempting to ask the question: 'Who is the Doctor?' All that I can offer by way of a response is to say that for millions of fans and viewers across the world (and perhaps for many readers of this article) 'Who is the Doctor' is not a question but a statement of fact, an assertion of faith.

Manuel Alvarado is co-author of the book 'Doctor Who: The Unfolding Text', published by Macmillan. A '20th Anniversary Special' is also available from BBC Publications, £1.50.