Who is this fellow with the wild, bushy hair 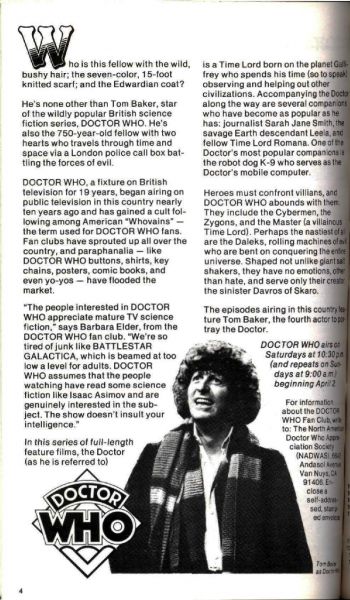 Who is this fellow with the wild, bushy hair; the seven-color, 15-foot knitted scarf; and the Edwardian coat?

He's none other than Tom Baker, star of the wildly popular British science fiction series, DOCTOR WHO. He's also the 750-year-old fellow with two hearts who travels through time and space via a London police call box battling the forces of evil.

DOCTOR WHO, a fixture on British television for 19 years, began airing on public television in this country nearly ten years ago and has gained a cult following among American "Whovains" — the term used for DOCTOR WHO fans. Fan clubs have sprouted up all over the country, and paraphanalia — like DOCTOR WHO buttons, shirts, key chains, posters, comic books, and even yo-yos — have flooded the market.

"The people interested in DOCTOR WHO appreciate mature TV science fiction," says Barbara Elder, from the DOCTOR WHO fan club. "We're so tired of junk like BATTLESTAR GALACTICA, which is beamed at too low a level for adults, DOCTOR WHO assumes that the people watching have read some science fiction like Isaac Asimov and are genuinely interested in the subject. The show doesn't insult your intelligence."

In this series of full-length feature films, the Doctor (as he is referred to) is a Time Lord born on the planet Gallifrey who spends his time (so to speak) observing and helping out other civilizations. Accompanying the Doctor along the way are several companions who have become as popular as he has: journalist Sarah Jane Smith, the savage Earth descendant Leela, and fellow Time Lord Romana. One of the Doctor's most popular companions is the robot dog K-9 who serves as the Doctor's mobile computer.

Heroes must confront villians, and DOCTOR WHO abounds with them. They include the Cybermen, the Zygons, and the Master (a villainous Time Lord). Perhaps the nastiest of are the Daleks, rolling machines of evil who are bent on conquering the entire universe. Shaped not unlike giant salt shakers, they have no emotions, of than hate, and serve only their creator the sinister Davros of Skaro.

The episodes airing in this country feature Tom Baker, the fourth actor to portray the Doctor.