Who owns the Tardis? 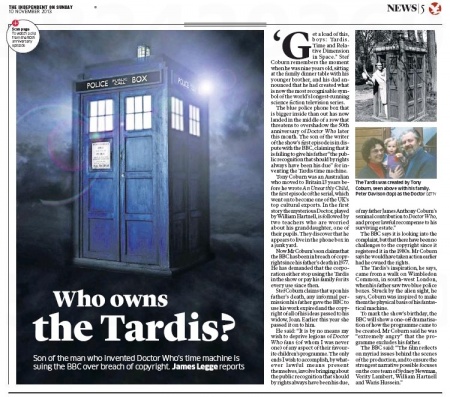 "Get a load of this, boys: Tardis. Time and Relative Dimension in Space." Stef Coburn remembers the moment when he was nine years old, sitting at the family dinner table with his younger brother, and his dad announced that he had created what is now the most recognisable symbol of the world's longest-running science fiction television series.

The blue police phone box that is bigger inside than out has now landed in the middle of a row that threatens to overshadow the 50th anniversary of Doctor Who later this month. The son of the writer of the show's first episode is in dispute with the BBC, claiming that it is failing to give his father "the public recognition that should by rights always have been his due" for inventing the Tardis time machine.

Tony Coburn was an Australian who moved to Britain 13 years before he wrote An Unearthly Child, the first episode of the serial, which went on to become one of the UK's top cultural exports. In the first story the mysterious Doctor, played by William Hartnell, is followed by two teachers who are worried about his granddaughter, one of their pupils. They discover that he appears to live in the phone box in a junk yard.

Now Mr Coburn's son claims that the BBC has been in breach of copyright since his father's death in 1977. He has demanded that the corporation either stop using the Tardis in the show or pay his family for its every use since then.

Stef Coburn claims that upon his father's death, any informal permission his father gave the BBC to use his work expired and the copyright of all of his ideas passed to his widow, Joan. Earlier this year she passed it on to him.

He said: "It is by no means my wish to deprive legions of Doctor Who fans (of whom I was never one) of any aspect of their favourite children's programme. The only ends I wish to accomplish, by whatever lawful means present themselves, involve bringing about the public recognition that should by rights always have been his due, of my father James Anthony Coburn's seminal contribution to Doctor Who, and proper lawful recompense to his surviving estate."

The BBC says it is looking into the complaint, but that there have been no challenges to the copyright since it registered it in the 1980s. Mr Coburn says he would have taken action earlier had he owned the rights.

The Tardis's inspiration, he says, came from a walk on Wimbledon Common, in south-west London, when his father saw two blue police boxes. Struck by the alien sight, he says, Coburn was inspired to make them the physical basis of his fantastical machine.

To mark the show's birthday, the BBC will show a one-off dramatisation of how the programme came to be created. Mr Coburn said he was "extremely angry" that the programme excludes his father.

The BBC said: "The film reflects on myriad issues behind the scenes of the production, and to ensure the strongest narrative possible focuses on the core team of Sydney Newman, Verity Lambert, William Hartnell and Waris Hussein."

Caption: The Tardis was crated by Tony Coburn, seen above with his family. Peter Davison (top) as the Doctor.