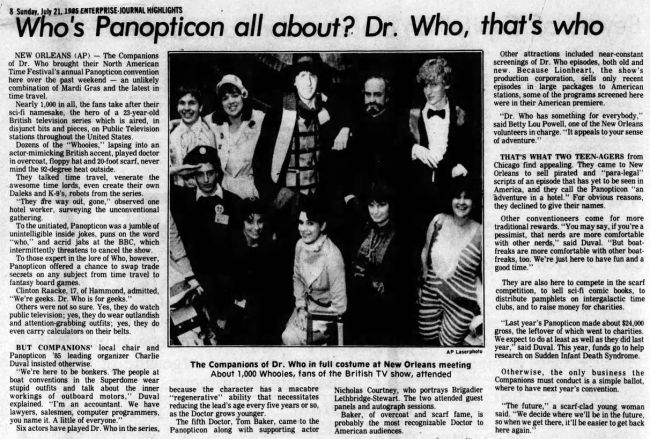 NEW ORLEANS (AP) - In an unlikely combination of Mardi Gras and the latest in time travel, fans of a venerable and quirky British television show that has spawned an American cult brought their annual convention here over the weekend.

Nearly 1.000 Companions of Dr. Who. taking their name from their science Briton hero, descended on the International Hotel for what they called the North American Time Festival's annual Panopticon.

Despite the 92 degree heat, many fans cattle dressed as Dr. Who, who favors an overcoat. floppy hat and 29 foot scarf wound round his neck. The British Broadcasting Corp. series is aired, in bits and pieces, on stations throughout the United States.

To the uninitiated. Panopticon was a jumble of unintelligible inside jokes, puns on the word "who." and jabs at the BBC, which intermittently threatens to cancel the 23 year old show.

"They are way out, gone" said one hotel worker, surveying the unconventional gathering of fans, who are nicknamed Mutes.

But to those aspen in the lore of Who, Panopticon offered a chance to swap trade secrets on any subject from time travel to fantasy board games

The TV show features the adventures of Dr. Who. who travels throughout time and space in a craft disguised us a police call box. His space vehicle is indistinguishable at rest from booths found un London streets that Britons use to call the police in emergencies.

Six actors hove played Dr. Who In the series because the character has a regenerative ability that necessitates reducing the lead's age every five years or so, as the doctor grows younger.

The fifth doctor, Tom Baker, came to the Panopticon along with supporting actor Nicholas Courtney, who portrays another character, Brigadier Lethbridge-Stewart. The two attended guest panels and autograph sessions.

Companions come from all walks of life, he said. "I'm an accountant. We have lawyers, salesmen, computer programmers, you name it. A little of everyone."

There were near constant screenings of Dr. Who episodes, old and new. For some programs it was the American premiere.

"Dr Who has something for everybody," said Betty Lou Powell, one of the New Orleans volunteers at the convention. "It appeals to your sense of adventure."

Two teenage Whoies front Chicago came to New Orleans with a sense of adventure. They were selling pirated scripts of an episode yet to be seen in the United States. Wholes also took part in a scarf competition. swapped and sold science fiction comic books, distributed pamphlets on intergalactic time clubs, and raised money for chanties.

"Last year's Panopticon made about $24,000 gross, the leftover of which went to charities. We expect to do at least as well as they did last year," said Duval. This year, funds go to help research on Sudden Infant Death Syndrome. Otherwise, the only business the Companions must conduct is a simple ballot on where to have next year's convention.

"The future," said one scarf clad young woman. "We decide where we'll be in the future. so when so get there, it'll be easier to get back hero again."