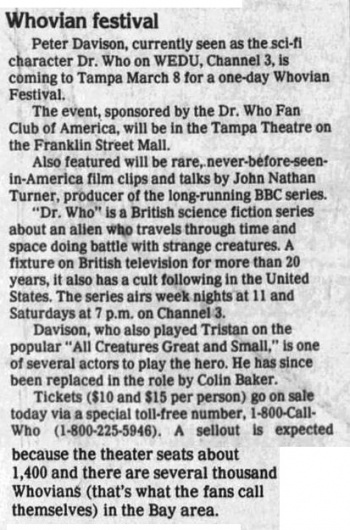 Peter Davison, currently seen as the sci-fi character Dr. Who on WEDU, Channel 3, is coming to Tampa March 8 for a one-day Whovian Festival.

The event, sponsored by the Dr. Who Fan Club of America. will be in the Tampa Theatre on the Franklin Street Mall.

Also featured will be rare, never-before-seen-in-America film clips and talks by John Nathan Turner, producer of the long-running BBC series.

"Dr. Who" is a British science fiction series about an alien who travels through time and space doing battle with strange creatures. A fixture on British television for more than 20 years, it also has a cult following in the United States. The series airs week nights at I I and Saturdays at 7 p.m. on Channel 3.

Davison, who also played Tristan on the popular "All Creatures Great and Small," is one of several actors to play the hero. He has since been replaced in the role by Colin Baker.

because the theater seats about 1,400 and there are several thousand Whovians (that's what the fans call themselves) in the Bay area.