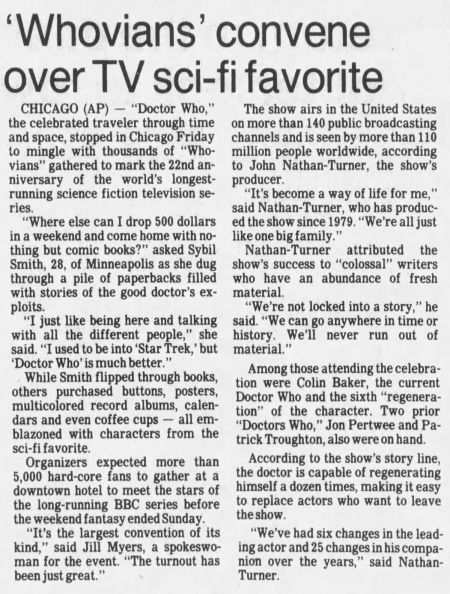 CHICAGO (AP) — "Doctor Who," the celebrated traveler through time and space, stopped in Chicago Friday to mingle with thousands of "Whovians" gathered to mark the 22nd anniversary of the world's longest-running science fiction television series.

"Where else can I drop 500 dollars in a weekend and come home with nothing but comic books?" asked Sybil Smith, 28, of Minneapolis as she dug through a pile of paperbacks filled with stories of the good doctor's exploits.

"I just like being here and talking with all the different people," she said. "I used to be into 'Star Trek,' but 'Doctor Who' is much better."

While Smith flipped through books, others purchased buttons, posters, multicolored record albums, calendars and even coffee cups — all emblazoned with characters from the sci-fi favorite.

Organizers expected more than 5,000 hard-core fans to gather at a downtown hotel to meet the stars of the long-running BBC series before the weekend fantasy ended Sunday.

"It's the largest convention of its kind," said Jill Myers, a spokeswoman for the event. "The turnout has been just great."

The show airs in the United States on more than 140 public broadcasting channels and is seen by more than 110 million people worldwide, according to John Nathan-Turner, the show's producer.

"It's become a way of life for me," said Nathan-Turner, who has produced the show since 1979. "We're all just like one big family."

Nathan-Turner attributed the show's success to "colossal" writers who have an abundance of fresh material.

"We're not locked into a story," he said. "We can go anywhere in time or history. We'll never run out of material."

Among those attending the celebration were Colin Baker, the current Doctor Who and the sixth "regeneration" of the character. Two prior "Doctors Who," Jon Pertwee and Patrick Troughton, also were on hand.

According to the show's story line, the doctor is capable of regenerating himself a dozen times, making it easy to replace actors who want to leave the show.

"We've had six changes in the leading actor and 25 changes in his companion over the years," said Nathan-Turner.