Whovians are campaigning to get 'Dr. Who' on the air 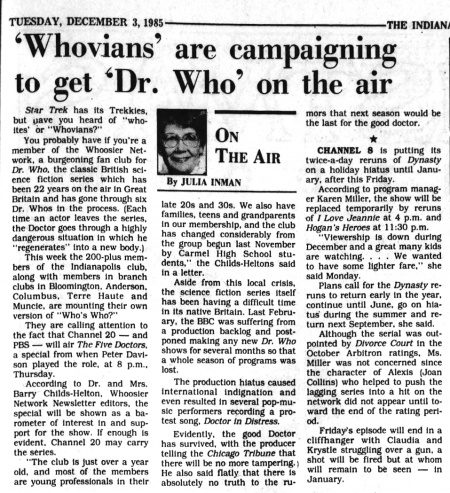 Star Trek has Its Trekkies, but have you heard of "who-des' or "Whovians?"

You probably have If you're a member of the Whoosier Network, a burgeoning fan club for Dr. Who, the classic British science fiction series which has been 22 years on the air in Great Britain and has gone through six Dr. Whos In the process. (Each time an actor leaves the series, the Doctor goes through a highly dangerous situation in which he "regenerates" into a new body.)

This week the 200-plus members of the Indianapolis club, along with members in branch clubs In Bloomington, Anderson, Columbus, Terre Haute and Muncie, are mounting their own version of "Who's Who?'

They are calling attention to the fact that Channel 20 — and PBS — will air The Five Doctors, a special from when Peter Davison played the role, at 8 p.m., Thursday.

According to Dr. and Mrs. Barry Childs-Helton, Whoosier Network Newsletter editors, the special will be shown as a barometer of interest in and support for the show. If enough is evident, Channel 20 may carry the series.

"The club is just over a year old, and most of the members are young professionals in their late 20s and 30s. We also have families, teens and grandparents in our membership, and the club has changed considerably from the group begun last November by Carmel High School students," the Childs-Helton said in a letter.

Aside from this local crisis, the science fiction crisis itself has been having a difficult time in its native Britain. Last February, the BBC was suffering from a production backlog and postponed making any new Dr. Who shows for several months so that a whole season of programs was lost.

The production hiatus caused international indignation and even resulted in several pop-music performers recording a protest song, Doctor In Distress.

Evidently. the good Doctor has survived, with the producer telling the Chicago Tribune that there will be no more tampering.) He also said flatly that there is absolutely no truth to the rumors that next season would be the last for the good doctor.