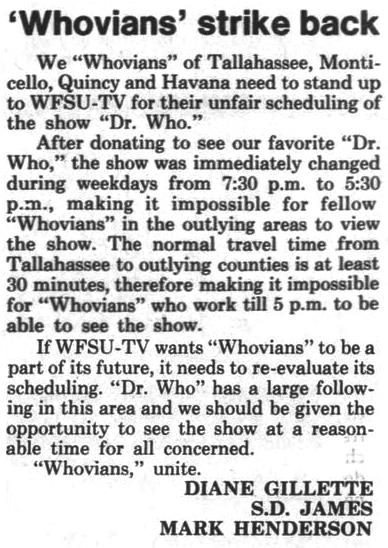 We "Whovians" of Tallahassee, Monticello, Quincy and Havana need to stand up to WFSU-TV for their unfair scheduling of the show "Dr. Who."

After donating to see our favorite "Dr. Who," the show was immediately changed during weekdays from 7:30 p.m. to 5:30 p.m., making it impossible for fellow "Whovians" in the outlying areas to view the show. The normal travel time from Tallahassee to outlying counties is at least 30 minutes, therefore making it impossible for "Whovians" who work till 5 p.m. to be able to see the show.

If WFSU-TV wants "Whovians" to be a part of its future, it needs to re-evaluate its scheduling. "Dr. Who" has a large following in this area and we should be given the opportunity to see the show at a reasonable time for all concerned.