Why Dr Who leaped out of a sack stark naked 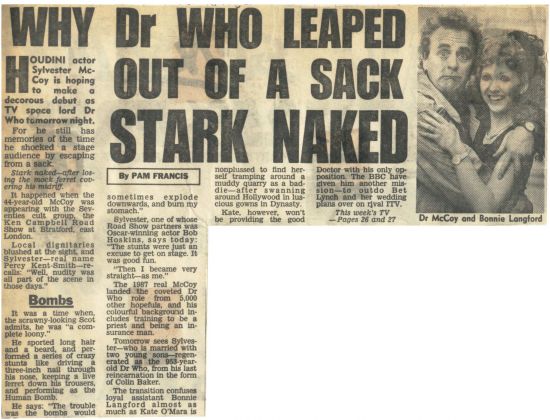 For he still has memories of the time he shocked a stage audience by escaping from a sack.

It happened when the 44-year-old McCoy was appearing with the Seventies cult group, the Ken Campbell Road Show at Stratford, east London.

Local dignitaries blushed at the sight, and Sylvester—real name Percy Kent-Smith—recalls: "Well, nudity was all part of the scene in those days."

It was a time when, the scrawny-looking Scot admits, he was "a complete loony."

He sported long hair and a beard, and performed a series of crazy stunts like driving a three-inch nail through his nose, keeping a live ferret down his trousers, and performing as the Human Bomb.

He says: "The trouble was the bombs would sometimes explode downwards, and burn my stomach."

Sylvester, one of whose Road Show partners was Oscar-winning actor Bob Hoskins, says today: "The stunts were just an excuse to get on stage. It was good fun.

"Then I became very straight—as me."

The 1987 real McCoy landed the coveted Dr Who role from 5,000 other hopefuls, and his colourful background includes training to be a priest and being an insurance man.

Tomorrow sees Sylvester—who is married with two young sons—regenerated as the 953-year-old Dr Who, from his last reincarnation in the form of Colin Baker.

The transition confuses loyal assistant Bonnie Langford almost as much as Kate O'Mara is nonplussed to find herself tramping around a quarry as a bad die—after swanning around Hollywood in luscious gowns in Dynasty.

Kate, however, won't be providing the good Doctor with his only opposition. The BBC have given him another mission—to outdo Bet Lynch and her wedding plans over on rival ITV.