Why I killed the Ponds 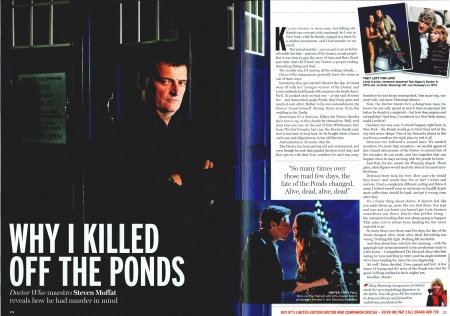 KILLING PEOPLE IS never easy, but killing old friends can even get a bit emotional. So I was in New York, with the family, trapped in a diner by a sudden snowstorm, and I had murder on my mind.

Not actual murder - you can get in an awful lot of trouble for that - and not, if I'm honest, actual people. But it was time to give the story of Amy and Rory Pond and their mad old friend, the Doctor, a proper ending. Something fitting and final.

The trouble was, I'd used up all the endings already... Doctor Who companions generally leave the series in one of three ways.

Sometimes they get married. Back in the day, Jo Grant went off with her "younger version" of the Doctor, and Leela suddenly held hands with someone she barely knew. Well, I'd peaked early on that one - at the end of series five - and damn those pesky Ponds, they'd only gone and married each other. Rather to his own astonishment, the Doctor found himself driving them away from the wedding in his Tardis.

Sometimes it's a decision. Either the Doctor decides their time is up, or they decide for themselves. Well, we'd done that one, too. At the end of Toby Whithouse's brilliant The God Complex last year, the Doctor finally realised it was time to step back. So he bought them a house and a car, and slipped away in the old blue box.

And sometimes, of course, they die.

The Doctor has been getting old and sentimental, and even though he took that painful decision to let Amy and Rory get on with their lives, somehow he can't stay away.

Somehow he just keeps coming back. One more trip, one more visit, one more Christmas dinner...

Now, the Doctor knows he's a dangerous man; he knows he can only spend so much time in anyone's life before he derails it completely - but how does anyone end a friendship? And how, I wondered in a New York winter, could I write it?

Decision one was easy. It would happen right here in New York - the Ponds would go to their final rest in the city that never sleeps. One of my favourite places in the world was somehow the right place to end it all.

Decision two followed a second later. We needed monsters. No, more than monsters - we needed agents of fate. Grand old enemies of the Doctor to remind him of the mistakes he can make, and the tragedies that can happen when he stays too long with the people he loves.

And that, for me, meant the Weeping Angels. Those grim, silent figures would teach the Doctor his most terrible lesson.

Decision three took for ever. How and why would they leave? And would they live or die? I wrote and rewrote. I had a completely different ending and threw it away. I locked myself away in my house in Cardiff, drank more coffee than should be legal, and got it wrong, time after time.

It's a funny thing about stories. It doesn't feel like you make them up, more like you find them. You type and type and you know you haven't got it yet, because somewhere out there, there's that perfect thing - the unexpected ending that was always going to happen. That place you've always been heading for, but never expected to go.

So many times over those mad few days, the fate of the Ponds changed. Alive, dead, alive, dead. Everything was wrong. Nothing felt right. Nothing felt inevitable.

And then about four o'clock in the morning - with the gaspingly late script promised to the production team in a few hours - I remembered The Eleventh Hour the first outing for Amy and Rory in 2010) and the single moment we've been heading for, since the very beginning.

Ah well! Fates decided. Lives spared and lost. A few hours of typing and the story of the Ponds was over for good. A fitting ending for their mighty era.

Katy Manning (companion Jo Grant) made her own tearjerking departure in the 1970s. Now she gives RT her reaction to Amy and Rory's sad farewell at radiotimes.com/doctorwho

Caption: THEY LEFT FOR LOVE