Why Katy did it! 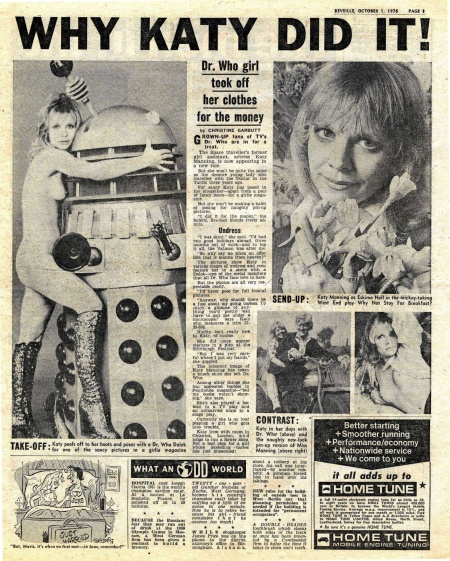 Dr. Who girl took off her clothes for the money

GROWN-UP fans of TV's Dr. Who are in for a treat.

But she won't be quite the same as the demure young lady who travelled with the "Doctor in the Tardis three years ago.

For saucy Katy has posed -in the altogether—apart from a pair of fancy boots—for a girlie magazine.

But she won't be making a habit of posing for naughty pin-up pictures.

"I did it for the money," the bubbly, five-foot blonde freely admits.

"I was skint;" she said. "I'd had two good holidays abroad, three months out of work—and - to top it all, the Vatman was after me.

"So why say no when an offer like that is manna from heaven?"

The pictures show Katy in various stages of undress and even feature her in a scene with a Dalek—one of the metal monsters that all Dr. Who fans love to hate.

But the photos are all very respectable really.

"Anyway, why should there be a fuss about my going topless. To catch a glimpse of any thing you'd pretty well have to put me under a microscope," says Katy who measures a trim 31-23-33½.

She did once appear starkers in a play at the Edinburgh Festival.

"But 'I' was very careful where I put my hands," she giggled.

The innocent image of Katy Manning has taken a knock since she left Dr. Who.

Among other things she has appeared topless in Penthouse magazine—"but my boobs weren't showing," she says.

She's also played a lesbian in a TV play and an unmarried mum in a stage play.

Caption: Katy Manning as Eskimo Nell in the mickey-taking West End play Why Not Stay For Breakfast?

Caption: Contrast: Katy in her days with Dr. Who' (above) and the naughty new-look pin-up version of Miss Manning (above right)

Caption: TAKE-OFF: Katy peels off to her boots and poses with a Dr. for one of the saucy pictures in a girlie magazine.