Why Ray can't exploit those Daleks 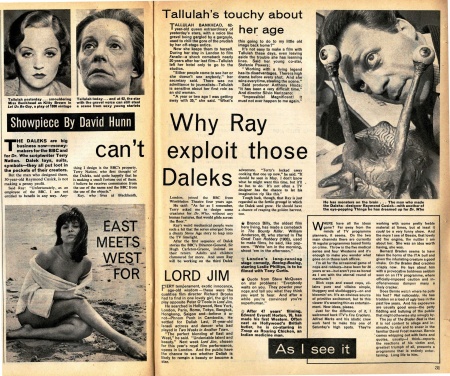 THE DALEKS are big business now—moneymakers for the BBC and for Dr. Who scriptwriter Terry Nation. Dalek toys, suits, symbols—they all put loot in the pockets of their creators.

But the man who designed them, 30-year-old Raymond Cusick, is not making a penny profit.

Said - Ray: "Unfortunately, as an employee of the BBC. 1 am not entitled to benefit in any way. Anything I design is the BBC's property. Terry Nation, who first thought of the Daleks, said quite happily that he is making a small fortune out of them. f believe he receives commission from the use of the name and the BBC from the use of the objects."

Ray, who lives at Blackheath, London, joined the BBC from Wimbledon Theatre four years ago.

He said: "As far as I remember, Terry asked me to design some creatures for Dr. Who, without any human features, that would glide across the floor."

Ray's weird mechanical people were such a hit that the series emerged from a dreary Stone Age story to leap into the TV limelight.

After the first sequence of Dalek stories the BBC's Director-General, Sir Hugh Carleton-Greene, insisted on their return. Adults and children clamoured for more. And soon Ray will be working on the third Dalek adventure. "Terry's locked away cooking that one up now." he said. "It should be seen in May. I don't know what he might want this time, but it'll be fun to do. It's not often a TV designer has the chance to let his imagination rip like this."

Tough luck, though, that Ray is just regarded as the fertile ground in which the Dalek seed grew. He should have a chance of reaping the golden harvest, too.