Why there really was something about Mary 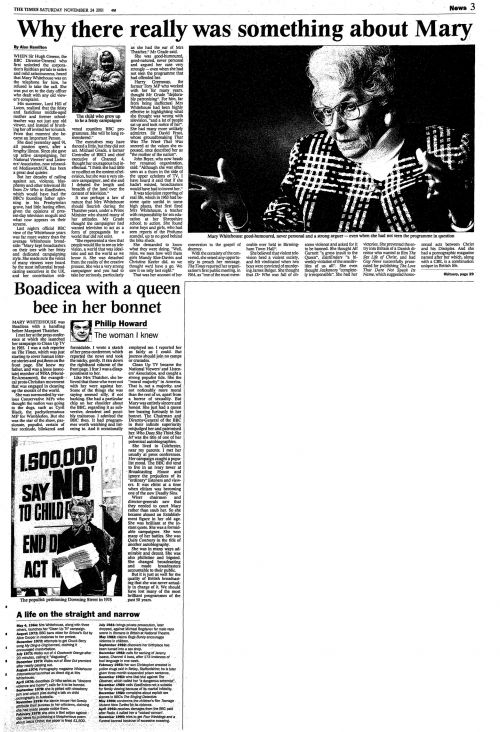 Mary Whitehouse: good-humoured, never personal and a strong arguer — even when she had not seen the programme in question

WHEN Sir Hugh Greene, the BBC Director-General who first unlocked the corporation's Reithian portals to satire and mild salaciousness, heard that Mary Whitehouse was on the telephone for him, he refused to take the call. She was put on to the duty officer who dealt with any old viewer's complaint.

His successor, Lord Hill of Luton, realised that the feisty and fastidious middle-aged mother and former schoolteacher was not just any old viewer, and instead of brushing her off invited her to lunch. From that moment she became an Important Person.

She died yesterday aged 91, all passion spent, after a lengthy illness. Since she gave up active campaigning, her National Viewers' and Listeners' Association, now rebranded MediawatchUK, has been a great deal quieter.

But her decades of railing against sex, violence, blasphemy and other televisual ills from Dr Who to EastEnders, which would have had the BBC's founding father spinning in his Presbyterian grave, had little lasting effect, given the opinions of present-day television moguls and what now appears on their screens.

Last night's official BBC view of the Whitehouse years was far more watery than the average Whitehouse broadside: "Mary kept broadcasters on their toes with her feisty and dedicated campaigning style. She made sure the voices of many viewers were heard by the most influential broadcasting 'executives in the UK, and her contribution enlivened countless BBC programmes. She will be long remembered."

The executives may have danced a little, but they did not act. Michael Grade, a former Controller of BBC1 and chief executive of Channel 4, thought her courageous but ineffectual. "I think she had little or no effect on the content of television, but she was a very sincere campaigner, and she and I debated the length and breadth of the land over the content of television."

It was perhaps a law of nature that Mrs Whitehouse should flourish during the Thatcher years, under a Prime Minister who shared many of her attitudes. Mr Grade thought the campaigner had wanted television to act as a form of propaganda for a world that did not exist.

"She represented a view that people would like to see on television, a world that was idealistic and not the world as we know it. She was detached from the reality of the creative process. She was a very strong campaigner and you had to take her seriously, particularly as she had the ear of Mrs Thatcher," Mr Grade said.

She was good-humoured, good-natured, never personal and argued her case very strongly — even when she had not seen the programme that had offended her.

Harry Greenway, the former Tory MP who worked with her for many years, thought Mr Grade "deplorably patronising". For him, far from being ineffectual Mrs Whitehouse had been highly effective in highlighting what she thought was wrong with television, "and a lot of people sat up and took notice of her". She had many more unlikely admirers. Sir David Frost, whose groundbreaking That Was The Week That Was sneered at the values she espoused, once described her as "the mother of the nation".

John Beyer, who now heads her renamed organisation, said: "Although she was often seen as a thorn in the side of the upper echelons of TV, I have heard it said that if she hadn't existed, broadcasters would have had to invent her."

It was television reporting of real life, which in 1963 had become quite sordid in some high places, that first fired Mrs Whitehouse, a teacher with responsibility for sex education at her Shropshire school, to action. She found some boys and girls, who had seen reports of the Profumo scandal, up to no good behind the bike sheds.

She demanded to know what they were doing. "Well, miss, we seen how well them girls Mandy Rice-Davies and Christine Keeler did, so we thought we'd have a go. We saw it on telly last night."

That was her account of her conversion to the gospel of decency.

With the certainty of the converted, she seized any opportunity to preach her message. The Times reported her organisation's first public meeting, in 1964, as "one of the most memorable ever held in Birmingham Town Hall".

She believed that violent television bred a violent society, and felt vindicated when two boys were convicted of murdering James Bulger. She thought that Dr Who was full of obscene violence and asked for it to be banned. She thought Alf Garnett "a gross insult to the Queen", EastEnders "a biweekly violation of the sensitivities of us all". She even thought Jackanory "completely irresponsible". She had her victories. She prevented the entry into Britain of a Danish director who wanted to film The Sex Life of Christ, and had Gay News successfully prosecuted for publishing The Love That Dare Not Speak Its Name, which suggested homo sexual acts between Christ and his Disciples. And she had a pornographic magazine named after her which, along with a CBE, is a combination unique in British life.

Boadicea with a queen bee in her bonnet

MARY WHITEHOUSE was Boadicea with a handbag before Margaret Thatcher.

I met her at the press conference at which she launched her campaign to Clean Up TV in 1965. I was a cub reporter on The Times, which was just starting to cover human interest stories and put them on the front page. She knew my father, and was a loose (associate) member of MRA (Moral-Re-Armament), the evangelical proto-Christian movement that was engaged in cleaning up the morals of the world.

She was surrounded by various Conservative MPs who thought the nation was going to the dogs, such as Cyril Black, the pachydermatous MP for Wimbledon. But she was the star of the show, passionate, populist, certain of her. rectitude, blinkered and formidable. I wrote a sketch of her press conference, which reported the news and took the micky, gently. It ran down the right-hand column of the front page. I fear I was a disappointment to her.

Like Mrs Thatcher, she believed that those who were not with her were against her. Some of the things she was saying seemed silly, if not barking. She had a particular chip on her shoulder about the BBC, regarding it as subversive, decadent and possibly traitorous. I admired the BBC then. It had programmes worth watching and listening to. And it occasionally employed me. I reported her as fairly as I could. But journos should join no camps or crusades.

Clean Up TV became the National Viewers' and Listeners' Association, and caught a strong populist tide, like the "moral majority" in America. That is, not a majority, and not noticeably more moral than the rest of us, apart from a horror of sexuality. But Mary was entirely sincere and honest. She just had a queen bee buzzing furiously in her bonnet. The Chairman and Director-General of the BBC in their infinite superiority misjudged her and patronised her. Who Does She Think She Is? was the title of one of her polemical autobiographies.

She lived in Colchester, near my parents. I met her usually at press conferences. Her campaign caught a populist mood. The BBC did tend to live in an ivory tower at Broadcasting House and ignore the prejudices of its "ordinary" listeners and viewers. It was elitist at a time when elitism was becoming one of the new Deadly Sins.

Wiser chairmen and director-generals saw that they needed to court Mary rather than snub her. So she became almost an Establishment figure in her old age. She was brilliant at the instant quote. She was a formidable campaigner. She won many of her battles. She was Quite Contrary in the title of another autobiography.

She was in many ways admirable and decent. She was also philistine and bigoted. She changed broadcasting and made broadcasters accountable to their public.

But it is just as well for the quality of British broadcasting that she was never actually in charge of it. We should have lost many of the most brilliant programmes of the past 50 years.

A life on the straight and narrow

May 4, 1964: Mrs Whitehouse, along with three others, launches-her "Clean Up TV campaign. August 1972: BBC bans video for School's Out by Alice Cooper in response to her protest.

July 1973: Walks out of A Clockwork Orange after 20 minutes, calling it "disgusting".

December 1973: Walks out of Blow Out premiere after nearly passing out.

April 1976: describes Dr Who series as "Obscene violence and horror"; calls for it-to be banned.

September 1978: she is pelted with strawberry jam and cream pies during a talk on child pornography in Australia.

November 1978: the dance troupe Hot Gossip attribute their success to her criticisms, claiming she made more people notice them.

February 1979: she wins a libel action against Gay News for publishing a blasphemous poem about Jesus Christ; the paper is fined £1,500.

September 1982: discovers her birthplace has been turned into a sex shop.

December 1982: calls for sacking of Jeremy Isaacs, Channel 4 boss, after 173 instances of bad language in one week.

February 1983: her son Christopher, arrested in police drugs raid in Betley, Staffordshire; he is later given three-month suspended prison sentence.

December 1983: wins libel trial against The Observer, which called her "a dangerous extremist".

November 1985: calls EastEnders not a suitable for family viewing because of its marital infidelity.

May 1990: condemns the children's film Teenage Mutant Hero Turtles for its violence.

April 1992: receives damages from the BBC paid after Radio 4 called her a "wicked woman".

November 1995: tries to get Four Weddings and a Funeral banned because of excessive swearing.