Wild and whacky life of Dr Who 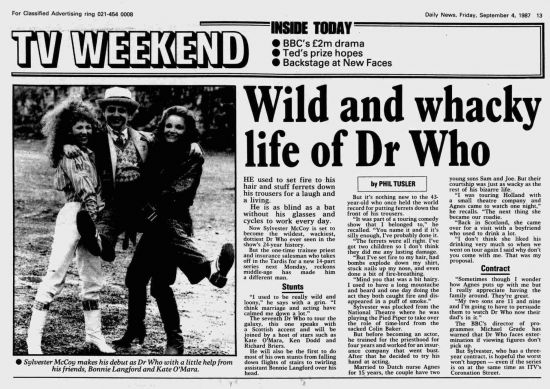 HE used to set fire to his hair and stuff ferrets down his trousers for a laugh and a living.

He is as blind as a bat without his glasses and cycles to work every day.

Now Sylvester McCoy is set to become the wildest, wackiest, dottiest Dr Who ever seen in the show's 24-year history.

But the one-time trainee priest and insurance salesman who takes off in the Tardis for a new 14-pan series next Monday, reckons middle-age has made him a different man.

"I used to be really wild and loony," he says with a grin. "I think marriage and acting have calmed me down a lot."

The seventh Dr Who to tour the galaxy, this one speaks with a Scottish accent and will be joined by a host of stars such as Kate O'Mara, Ken Dodd and Richard Briers.

He will also be the first to do most of his own stunts from falling dream flights of stairs to twirling assistant Bonnie Langford over his head.

But it's nothing new to the 43. year-old who once held the world record for putting ferrets down the front of his trousers.

"It was part of a touring comedy show that I belonged to," he recalled. "You name it and if it's silly enough, I've probably done it. "The ferrets were all right. I've got two children so I don't think they did me any lasting damage. "But. I've set fire to my hair, had bombs explode down my shirt, stuck nails up my nose, and even done a bit of fire-breathing. "Mind you that was a bit hairy. I used to have a long moustache and beard and one day doing the act they both caught fire and disappeared in a puff of smoke." Sylvester was plucked from the National Theatre where he was playing the Pied Piper to take over the role of time.lord from the sacked Cohn Baker.

But before becoming an actor, he trained for the priesthood for four years and worked for an insurance company that went bust. After that he decided to try his hand at acting.

Married to Dutch nurse Agnes for 15 years, the couple have two young sons Sam and Joe. But their courtship was just as wacky as the rest of his bizarre life.

"I was touring Holland with a small theatre company and Agnes came to watch one night," he recalls. "The next thing she became our roadie.

"Back in Scotland, she came over for a visit with a boyfriend who used to drink a lot.

"1 don't think she liked his drinking very much so when we went on tour again I said why don't you come with me. That was my proposal.

"Sometimes though I wonder how Agnes puts up with me but I really appreciate having the family around. They're great. "My two sons are 11 and nine and I'm going to have to persuade them to watch Dr Who now their dad's in it."

The BBC's director of programmes Michael Grade has warned that Dr Who faces extermination if viewing figures don't pick up.

But Sylvester, who has a three-year contract, is hopeful the wont won't happen — even if the series is on at the same time as ITV's Coronation Street.

Caption: Sylvester McCoy makes his debut as Dr Who with a little help from his friends, Bonnie Langford and Kate O'Mara.