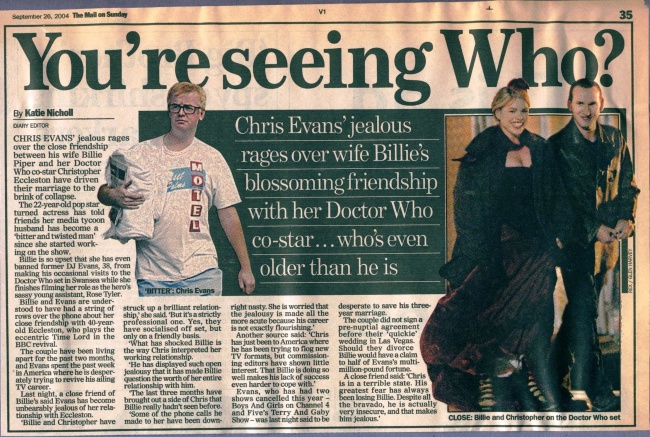 CHRIS EVANS' jealous rages over the close friendship between his wife Billie Piper and her Doctor Who co-star Christopher Eccleston have driven their marriage to the brink of collapse.

The 22-year-old pop star turned actress has told friends her media tycoon husband has become a 'bitter and twisted man' since she started working on the show.

Billie is so upset that she has even banned former DJ Evans, 38, from making his occasional visits to the Doctor Who set in Swansea while she finishes filming her role as the hero's sassy young assistant, Rose Tyler. Billie and Evans are understood to have had a string of rows over the phone about her close friendship with 40-year-old Eccleston, who plays the eccentric Time Lord in the BBC revival.

The couple have been living apart for the past two months, and Evans spent the past week in America where he is desperately trying to revive his ailing TV career.

Last night, a close friend of Billie's said Evans has become unbearably jealous of her relationship with Eccleston.

Billie and Christopher have struck up a brilliant relationship,' she said. 'But it's a strictly professional one. Yes, they have socialised off set, but only on a friendly basis.

'What has shocked Billie is the way Chris interpreted her working relationship.

'He has displayed such open jealousy that it has made Billie question the worth of her entire relationship with him.

'The last three months have brought out a side of Chris that Billie really hadn't seen before. 'Some of the phone calls he made to her have been down-

right nasty. She is worried that the jealousy is made all the more acute because his career is not exactly flourishing.'

Another source said: 'Chris has just been to America where he has been trying to flog new TV formats, but commissioning editors have shown little interest. That Billie is doing so well makes his lack of success even harder to cope with.'

Evans, who has had two shows cancelled this year Boys And Girls on Channel 4 and Five's Terry And Gaby Show - was last night said to be desperate to save his three-year marriage.

The couple did not sign a pre-nuptial agreement before their 'quickie' wedding in Las Vegas. Should they divorce Billie would have a claim to half of Evans's multimillion-pound fortune. A close friend said: 'Chris is in a terrible state. His greatest fear has always been losing Billie. Despite all the bravado, he is actually very insecure, and that makes him jealous.'

CLOSE: Billie and Christopher on the Doctor Who set