You've had your Chibs 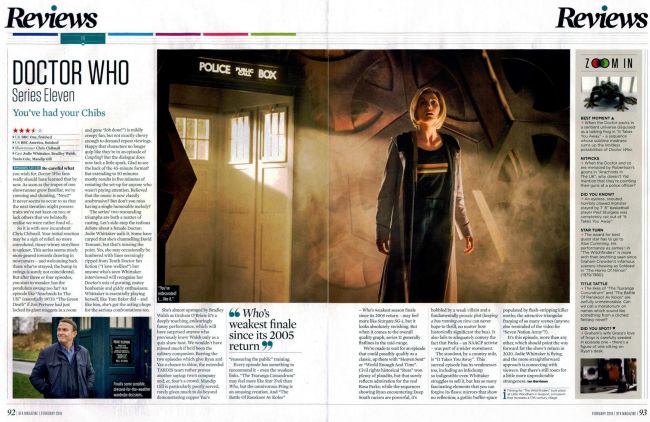 EPISODES 1.014.10 Be careful what you wish for. Doctor Who fans really should have learned that by now. As soon as the tropes of one showrunner grow familiar, we're yawning and shouting, "Next!" It never seems to occur to us that the next iteration might possess traits we're not keen on too; or lack others that we belatedly realise we were rather fond of...

So it is with new incumbent Chris Chibnall. Your initial reaction may be a sigh of relief: no more convoluted, timey-wimey storylines to unknot. This series seems much more geared towards drawing in newcomers - and welcoming back those who've strayed; the bump in ratings is surely not coincidental. But after three or four episodes, you start to wonder: has the pendulum swung too far? An episode like "Arachnids In The UK" (essentially 1973's "The Green Death" if Jon Pertwee had just locked its giant maggots in a room and gone "Job done!") is mildly creepy fun, but not exactly chewy enough to demand repeat viewings. Happy that characters no longer quip like they're in an episode of Coupling? But the dialogue does now lack a little spark. Glad to see the back of the 45-minute format? But extending to 50 minutes mostly results in five minutes of restating the set-up for anyone who wasn't paying attention. Relieved that the music is now classily unobtrusive? But don't you miss having a single hummable melody?

The series' two resounding triumphs are both a matter of casting. Let's side-step the tedious debate about a female Doctor: Jodie Whittaker nails it. Some have carped that she's channelling David Tennant, but that's missing the point. Yes, she may occasionally be lumbered with lines seemingly ripped from Tenth Doctor fan fiction ("I love wellies!") but anyone who's seen Whittaker interviewed will recognise her Doctor's mix of gurning, matey bonhomie and giddy enthusiasm: Whittaker is essentially playing herself, like Tom Baker did - and like him, she's got the acting chops for the serious confrontations too.

She's almost upstaged by Bradley Walsh as Graham O'Brien: it's a deeply touching, endearingly funny performance, which will have surprised anyone who previously knew Walsh only as a quiz show host. We wouldn't have missed much if he'd been the solitary companion. Barring the two episodes which give Ryan and Yaz a chance to shine, the extended TARDIS team rather proves another saying: two's company and, er, four's a crowd. Mandip Gill is particularly poorly served, rarely given much to do beyond demonstrating copper Yaz's "reassuring the public" training.

Every episode has something to recommend it - even the weakest links. "The Tsuranga Conundrum" may feel more like Star Trek than Who, but the omnivorous Pting is an amusing creation. And "The Battle Of Ranskoor Av Kolos"

Who's weakest season finale since its 2005 return - may feel more like Stargate SG-1, but it looks absolutely ravishing. But when it comes to the overall quality graph, series 11 generally flatlines in the mid-range.

Were made to wait for an episode that could possibly qualify as a classic, up there with "Heaven Sent" or "World Enough And Time". Civil rights historical "Rose" won plenty of plaudits, but that surely reflects admiration for the real Rosa Parks; while the sequences showing Ryan encountering Deep South racism are powerful, it's hobbled by a weak villain and a fundamentally prosaic plot (keeping a bus running on time can never hope to thrill, no matter how historically significant the bus). It also fails to adequately convey the fact that Parks - an NAACP activist - was part of a wider movement.

The standout, by a country mile, is "It Takes You Away". This surreal episode has its weaknesses too, including an infodump so indigestible even Whittaker struggles to sell it, but has so many fascinating elements that you can forgive its flaws: mirrors that show no reflection; a gothic buffer-space populated by flesh-stripping killer moths; the attractive triangular framing of so many scenes (anyone else reminded of the video for "Seven Nation Army"?).

It's this episode, more than any other, which should point the way forward for the show's return in 2020. Jodie Whittaker is flying, and the more straightforward approach is connecting with viewers. But there's still room for a little more unpredictable strangeness.

Filming for "The Witchfinders" took place at Little Woodham in Gosport. a museum that recreates a 17th century village.

- When the Doctor packs in a sentient universe disguised as a talking frog in "It Takes You Away" - a sequence whose sublime madness sums up the limitless possibilities of Doctor Who.

When the Doctor and co are menaced by Robertson's goons in "Arachnids In The UK", why doesn't Yaz mention that they're pointing their guns at a police officer?

An eyeless, snouted, horribly clawed monster played by 7' 8" basketball player Paul Sturgess was completely cut out of "It Takes You Away".

The likes of "The Tsuranga Conundrum" and "The Battle Of Ranskoor Av Kolos" are awfully unmemorable. Can we call a moratorium on names which sound like something from a cliched fantasy novel?

Graham's wife Grace's love of frogs is carefully seeded in episode one - there's a figure of one sitting on Ryan's desk.