You Know Who (Today) 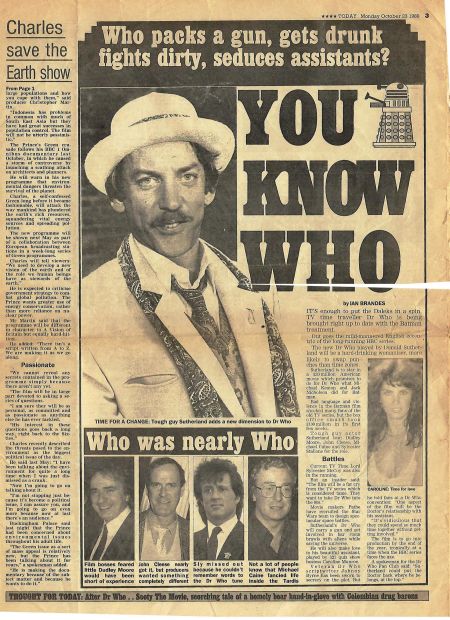 Who packs a gun, gets drunk fights dirty, seduces assistants?

IT'S enough to put the Daleks in a spin. TV time traveller Dr Who is being brought right up to date with the Batman treatment,

Out goes the mild-mannered English eccentric of the long-running BBC series.

The new Dr Who played by Donald Sutherland will be a hard drinking womanizer, more likely to swap punches than time zones.

Sutherland is to star in a £20 million American movie which promises to do for Dr Who what Michael Keaton and Jack Nicholson did for Batman.

Bad language and violence in the Batman film shocked many fans of the old TV series, but the box office smash took £100 million in its first few weeks.

But an insider said: "The film will be a far cry from the TV series which is considered tame. They want to take Dr Who into the 90s."

Sutherland's Dr Who will carry a gun and get involved in bar room brawls with aliens while saving the universe.

He will also make love to his beautiful assistant, played by 321 quiz show hostess Caroline Munroe.

Veteran Dr Who scriptwriter Johnny Byrne has been sworn to secrecy on the plot. But he told fans at a Dr Who convention: "One aspect of the film will be the Doctor's relationship with his assistant.

"It's ridiculous that they could spend so much time together without getting involved."

The film is to go into production by the end of the year, ironically at a time when the BBC series faces the axe.

A spokesman for the Dr Who Fan Club said: "Sutherland could put, the Doctor back where he belongs, at the top."

Caption: TIME FOR A CHANGE: Tough guy Sutherland adds a new dimension to Dr Who

Who was nearly Who

John Cleese nearly got it, but producers wanted something completely different