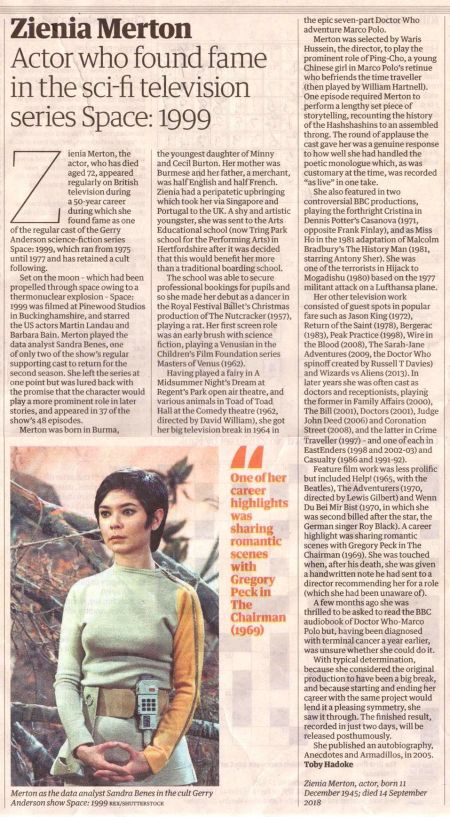 Actor who found fame in the sci-fi television series Space:1999

Zienia Merton, the actor, who has died aged 72, appeared regularly on British television during a 50-year career during which she found fame as one of the regular cast of the Gerry Anderson science-fiction series Space: 1999, which ran from 1975 until 1977 and has retained a cult following.

Set on the moon - which had been propelled through space owing to a thermonuclear explosion - Space: 1999 was filmed at Pinewood Studios in Buckinghamshire, and starred the US actors Martin Landau and Barbara Bain. Merton played the data analyst Sandra Benes, one of only two of the show's regular supporting cast to return for the second season. She left the series at one point but was lured back with the promise that the character would play a more prominent role in later stories, and appeared in 37 of the show's 48 episodes.

Merton was bom in Burma, the youngest daughter of Minny and Cecil Burton. Her mother was Burmese and her father, a merchant, was half English and half French. Zienia had a peripatetic upbringing which took her via Singapore and Portugal to the UK. A shy and artistic youngster, she was sent to the Arts Educational school (now Tring Park school for the Performing Arts) in Hertfordshire after it was decided that this would benefit her more than a traditional boarding school.

The school was able to secure professional bookings for pupils and so she made her debut as a dancer in the Royal Festival Ballet's Christmas production of The Nutcracker (1957), playing a rat. Her first screen role was an early brush with science fiction, playing a Venusian in the Children's Film Foundation series Masters of Venus (1962).

Having played a fairy in A Midsummer Night's Dream at Regent's Park open air theatre, and various animals in Toad of Toad Hall at the Comedy theatre (1962, directed by David William), she got her big television break in 1964 in the epic seven-part Doctor Who adventure Marco Polo.

Merton was selected by Waris Hussein, the director, to play the prominent role of Ping-Cho, a young Chinese girl in Marco Polo's retinue who befriends the time traveller (then played by William Hartnell). One episode required Merton to perform a lengthy set piece of storytelling, recounting the history of the Hashshashins to an assembled throng. The round of applause the cast gave her was a genuine response to how well she had handled the poetic monologue which, as was customary at the time, was recorded "as live in one take.

She also featured in two controversial BBC productions, playing the forthright Cristina in Dennis Potter's Casanova (1971, opposite Frank Finlay), and as Miss Ho in the 1981 adaptation of Malcolm Bradbury's The History Man (1981, starring Antony Sher). She was one of the terrorists in Hijack to Mogadishu (1980) based on the 1977 militant attack on a Lufthansa plane.

Feature film work was less prolific but included Help! (1965, with the Beatles), The Adventurers (1970, directed by Lewis Gilbert) and Wenn Du Bei Mir Bist (1970, in which she was second billed after the star, the German singer Roy Black). A career highlight was sharing romantic scenes with Gregory Peck in The Chairman (1969). She was touched when, after his death, she was given a handwritten note he had sent to a director recommending her for a role (which she had been unaware of).

A few months ago she was thrilled to be asked to read the BBC audiobook of Doctor Who-Marco Polo but, having been diagnosed with terminal cancer a year earlier, was unsure whether she could do it.

With typical determination, because she considered the original production to have been a big break, and because starting and ending her career with the same project would lend it a pleasing symmetry, she saw it through. The finished result, recorded in just two days, will be released posthumously.

Caption: Merton as the data analyst Sandra Benes in the cult Gerry

Caption: One of her career highlights was sharing romantic scenes with Gregory Peck in The Chairman (1969)