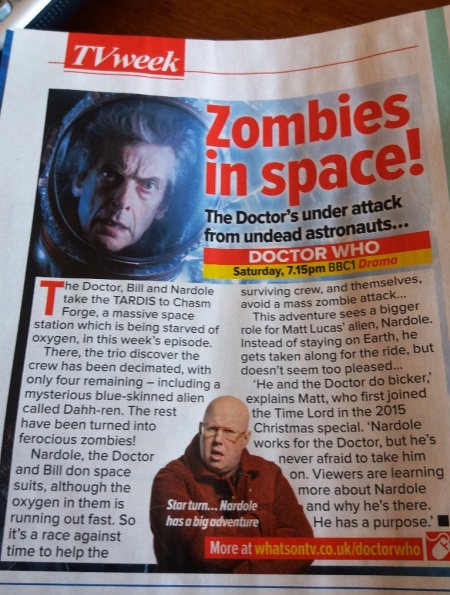 The Doctor's under attack from undead astronauts...

The Doctor, Bill and Nardole take the TARDIS to Chasm Forge, a massive space station which is being starved of oxygen, in this week's episode.

There, the trio discover the crew has been decimated, with only four remaining — including a mysterious blue-skinned alien called Dahh-ren. The rest have been turned into ferocious zombies!

Nardole, the Doctor and Bill don space suits, although the oxygen in them is running out fast. So it's a race against time to help the surviving crew, and themselves, avoid a mass zombie attack...

This adventure sees a bigger role for Matt Lucas' alien. Nardole. Instead of staying on Earth. he gets taken along for the ride. but doesn't seem too pleased...

'He and the Doctor do bicker,' explains Matt, who first joined the Time Lord in the 2015 ....Christmas special. 'Nardole works for the Doctor, but he's never afraid to take him on. Viewers are learning more about Nardole and why he's there. He has a purpose.