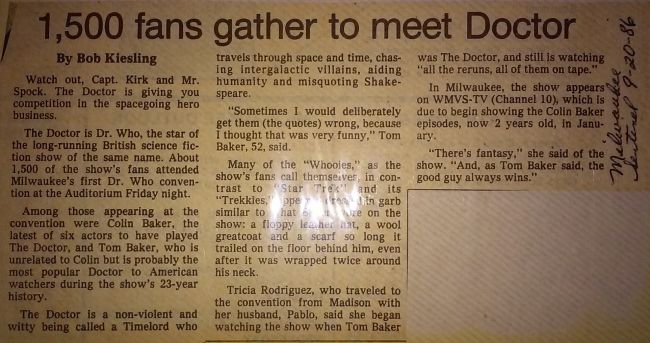 Watch out, Capt. Kirk and Mr. Spock. The Doctor is giving you competition in the spacegoing hero business.

The Doctor is Dr. Who, the star of the long-running British science fiction show of the same name. About 1,500 of the show's fans attended Milwaukee's first Dr. Who convention at the Auditorium Friday night.

Among those appearing at the convention were Colin Baker, the latest of six actors to have played The Doctor, and Tom Baker, who is unrelated to Colin but is probably the most popular Doctor to American watchers during the show's 23-year history.

The Doctor is a non-violent and witty being called a Timelord who travels through space and time, chasing intergalactic villains, aiding humanity and misquoting Shakespeare.

"Sometimes I would deliberately get them (the quotes) wrong, because I thought that was very funny," Tom Baker, 52, said.

Many of the "Whooies," as the show's fans call themselves, in contrast to "Star Trek" and its "Trekkies," appear dressed in garb similar that Baker wore on the show: a floppy leather hat, a wool greatcoat and a scarf so long it trailed on the floor behind him, even after it was wrapped twice around his neck.

Tricia Rodriguez, who traveled to the convention from Madison with her husband, Pablo, said she began watching the show when Tom Baker was The Doctor, and still is watching "all the reruns, all of them on tape."

In Milwaukee, the show appears on WMVS-TV (Channel 10), which is due to begin showing the Colin Baker episodes, now 2 years old, in January.

"There's fantasy," she said of the show. "And, as Tom Baker said, the good guy always wins."