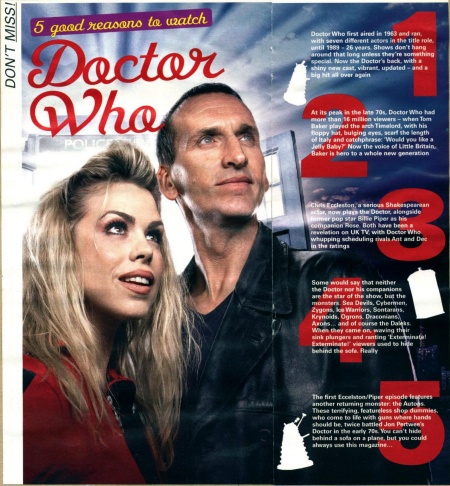 1 Doctor Who first aired in 1963 and ran, with seven different actors in the title role, until 1989 - 26 years. Shows don't hang around that long unless they're something special. Now the Doctor's back, with a shiny new cast, vibrant, updated - and a big hit all over again

2 At its peak in the late 70s, Doctor Who had more than 16 million viewers - when Tom Baker played the arch Timelord, with his floppy hat, bulging eyes, scarf the length of Italy and catchphrase: 'Would you like a Jelly Baby?' Now the voice of Little Britain, Baker is hero to a whole new generation

3 Chris Eccleston, a serious Shakespearean, now plays the Doctor, alongside former pop star Billie Piper as his companion Rose. Both have been a revelation on UK TV, with Doctor Who whupping scheduling rivals Ant and Dec in the ratings

4 Some would say that neither the Doctor nor his companions are the star of the show, but the monsters. Sea Devils, Cybermen, Zygons, Ice Warriors, Sontarans, Krynoids, Ogrons, Draconians!, Axons... and of course the Daleks. When they came on, waving th ir sink plungers and ranting 'Exterminate! Exterminate!' viewers used to hide behind the sofa. Really

5 The first Eccelston/Piper episode features another returning monster: the Autons. These terrifying, featureless shop dummies, who come to life with guns where hands should be, twice battled Jon Pertwee's Doctor in the early 70s. You can't hide behind a sofa on a plane, but you could always use this magazine...