A Dog's Life for Leela 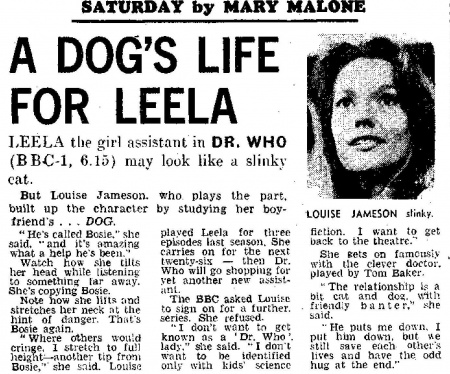 But Louise Jameson who plays the part, built up the character by studying her boyfriend's ... DOG.

Watch how she tilts her head white listening to something far away. She's copying Bosie.

Note how she lifts and stretches her neck at the hint of danger. That's Bosie again.

"Where others would cringe, I stretch to full height-another tip from Bosie," she said. Louise played Leela for twenty-six episodes last season. She carries on for the next twenty-six — then Dr. Who will go shopping for Yet another new assistant.

The BBC asked Louise to sign on for a further series. She refused-

She gets on famously with the clever doctor, played by Tom Baker.

"The relationship is a bit, cat and dog. With friendly banter." she said.

"He puts me down, I put him down, but we stilt save each other's, lives and have the odd hug at the end."