A Life in the Day of Tom Baker 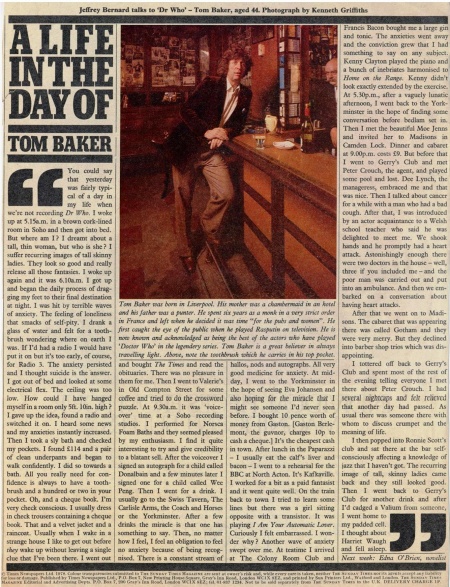 You could say that yesterday was fairly typical of a day in my life when we're not recording Dr Who. I woke up at 5.15a.m. in a brown cork-lined room in Soho and then got into bed. But where am I ? I dreamt about a tall, thin woman, but who is she ? I suffer recurring images of tall skinny ladies. They look so good and really release all those fantasies. I woke up again and it was 6.10a.m. I got up and began the daily process of dragging my feet to their final destination at night. I was hit by terrible waves of anxiety. The feeling of loneliness that smacks of self-pity. I drank a glass of water and felt for a toothbrush wondering where on earth I was. If I'd had a radio I would have put it on but it's too early, of course, for Radio 3. The anxiety persisted and I thought suicide is the answer. I got out of bed and looked at some electrical flex. The ceiling was too low. How could I have hanged myself in a room only 5ft. loin. high ? I gave up the idea, found a radio and switched it on. I heard some news and my anxieties instantly increased. Then I took a sly bath and checked my pockets. I found £114 and a pair of clean underpants and began to walk confidently. I did so towards a bath. All you really need for confidence is always to have a toothbrush and a hundred or two in your pocket. Oh, and a cheque book. I'm very check conscious. I usually dress in check trousers containing a cheque book. That and a velvet jacket and a raincoat. Usually when I wake in a strange house I like to get out before they wake up without leaving a single clue that I've been there. I went out and bought The Times and read the obituaries. There was no pleasure in them for me. Then I went to Valerie's in Old Compton Street for some coffee and tried to do the crossword puzzle. At 9.30a.m. it was 'voice-over' time at a Soho recording studios. I performed for Norsca Foam Baths and they seemed pleased by my enthusiasm. I find it quite interesting to try and give credibility to a blatant sell. After the voiceover I signed an autograph for a child called Donalbain and a few minutes later I signed one for a child called Wee Peng. Then I went for a drink. I usually go to the Swiss Tavern, The Carlisle Arms, the Coach and Horses or the Yorkminster. After a few drinks the miracle is that one has something to say. Then, no matter how I feel, I feel an obligation to feel no anxiety because of being recognised. There is a constant stream of hallos, nods and autographs. All very good medicine for anxiety. At midday, I went to the Yorkminster in the hope of seeing Eva Johansen and also hoping for the miracle that I might see someone I'd never seen before. I bought 10 pence worth of money from Gaston. [Gaston Berlemont, the guvnor, charges lop to cash a cheque.] It's the cheapest cash in town. After lunch in the Paparazzi — I usually eat the calf's liver and bacon — I went to a rehearsal for the BBC at North Acton. It's Kafkaville. I worked for a bit as a paid fantasist and it went quite well. On the train back to town I tried to learn some lines but there was a girl sitting opposite with a transistor. It was playing I Am Your Automatic Lover. Curiously I felt embarrassed. I wonder why ? Another wave of anxiety swept over me. At teatime I arrived at The Colony Room Club and

Francis Bacon bought me a large gin and tonic. The anxieties went away and the conviction grew that I had something to say on any subject. Kenny Clayton played the piano and a bunch of inebriates harmonised to Home on the Range. Kenny didn't. look exactly extended by the exercise. At 5.30p.m., after a vaguely lunatic afternoon, I went back to the Yorkminster in the hope of finding some conversation before bedlam set in. Then I met the beautiful Moe Jenns and invited her to Madisons in Camden Lock. Dinner and cabaret at 9.00p.m. costs £9. But before that I went to Gerry's Club and met Peter Crouch, the agent, and played some pool and lost. Dee Lynch, the manageress, embraced me and that was nice. Then I talked about cancer for a while with a man who had a bad cough. After that, I was introduced by an actor acquaintance to a Welsh school teacher who said he was delighted to meet me. We shook hands and he promptly had a heart attack. Astonishingly enough there were two doctors in the house — well, three if you included me — and the poor man was carried out and put into an ambulance. And then we embarked on a conversation about having heart attacks.

After that we went on to Madisons. The cabaret that was appearing there was called Gotham and they were very merry. But they declined into barber shop trios which was disappointing.

I tottered off back to Gerry's Club and spent most of the rest of the evening telling everyone I met there about Peter Crouch. I had several nightcap§ and felt relieved that another day had passed. As usual there was someone there with whom to discuss crumpet and the meaning of life.

I then popped into Ronnie Scott's club and sat there at the bar self-consciously affecting a knowledge of jazz that I haven't got. The recurring image of tall, skinny ladies came back and they still looked good. Then I went back to Gerry's Club for another drink and after I'd cadged a Valium from someone, I went home to my padded cell. I thought about Harriet Waugh and fell asleep.

Tom Baker was born in Liverpool. His mother was a chambermaid in an hotel and his father was a punter. He spent six years as a monk in a very strict order in France and left when he decided it was time "for the pubs and women". He first caught the eye of the public when he played Rasputin on television. He is now known and acknowledged as being the best of the actors who have played 'Doctor Who' in the legendery series. Tom Baker is a great believer in always travelling light. Above, note the toothbrush which he carries in his top pocket.