A feast of thrills! 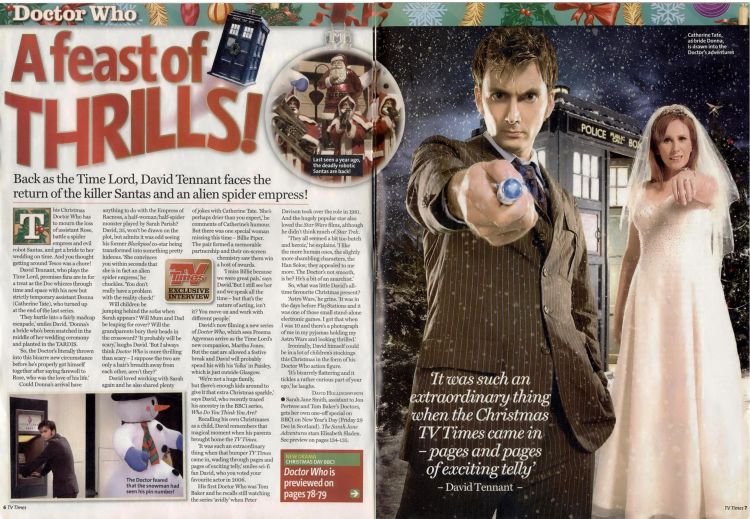 Back as the Time Lord, David Tennant faces the return of the killer Santas and an alien spider empress!

This Christmas Doctor Who has to mourn the loss of assistant Rose, battle a spider empress and evil robot Santas, and get a bride to her wedding on time. And you thought getting around Tesco was a chore!

David Tennant, who plays the Time Lord, promises fans are in for a treat as the Doc whizzes through time and space with his new but strictly temporary assistant Donna (Catherine Tate), who turned up at the end of the last series.

'They hurtle into a fairly madcap escapade, smiles David. 'Donna's a bride who's been snatched in the middle of her wedding ceremony and planted in the TARDIS.

'So, the Doctor's literally thrown into this bizarre new circumstance before he's properly got himself together after saying farewell to Rose, who was the love of his life:

Could Donna's arrival have anything to do with the Empress of Racnoss, a half-woman/half-spider monster played by Sarah Parish? David, 35, won't be drawn on the plot, but admits it was odd seeing his former Blackpool co-star being transformed into something pretty hideous. She convinces you within seconds that she is in fact an alien spider empress; he chuckles. 'You don't really have a problem with the reality check!'

Will children be jumping behind the sofas when Sarah appears? Will Mum and Dad be leaping for cover? Will the grandparents bury their heads in the crossword? 'It probably will be scary; laughs David. 'But I always think Doctor Who is more thrilling than scary - I suppose the two are only a hair's breadth away from each other, aren't they?'

David loved working with Sarah again and he also shared plenty ofjokes with Catherine Tate. 'She's perhaps drier than you expect,' he comments of Catherine's humour. But there was one special woman missing this time - Billie Piper. The pair formed a memorable partnership and their on-screen chemistry saw them win a host of awards.

'I miss Billie because we were great pals; says David. 'But I still see her and we speak all the time - but that's the nature of acting, isn't it? You move on and work with different people.'

David's now filming a new series of Doctor Who, which sees Freema Agyeman arrive as the Time Lord's new companion, Martha Jones. But the cast are allowed a festive break and David will probably spend his with his 'folks' in Paisley, which is just outside Glasgow.

'We're not a huge family, but there's enough kids around to give it that extra Christmas sparkle, says David, who recently traced his ancestry in the BBC1 series, Who Do You Think You Are?

Recalling his own Christmases as a child, David remembers that magical moment when his parents brought home the TV Times.

'It was such an extraordinary thing when that bumper TV Times came in, wading through pages and pages of exciting telly,' smiles sci-fi fan David, who you voted your favourite actor in 2006.

His first Doctor Who was Tom Baker and he recalls still watching the series 'avidly' when Peter Davison took over the role in 1981. And the hugely popular star also loved the Star Wars films, although he didn't think much of Star Trek.

'They all seemed a bit too butch and heroic; he explains. 'I like the more human ones, the slightly more shambling characters, the Han Solos; they appealed to me more. The Doctor's not smooth, is he? He's a bit of an anarchist:

So, what was little David's all-time favourite Christmas present?

'Astro Wars; he grins. 'It was in the days before PlayStations and it was one of those small stand-alone electronic games. I got that when I was 10 and there's a photograph of me in my pyjamas holding my Astro Wars and looking thrilled.'

Ironically, David himself could be in a lot of children's stockings this Christmas in the form of his Doctor Who action figure.

'It's bizarrely flattering and it tickles a rather curious part of your ego; he laughs.

Doctor Who is previewed on pages 78-79

Last seen a year ago, the deadly robotic Santas are back!

The Doctor feared that the snowman had seen his pin number!

Catherine Tate, as bride Donna, is drawn into the Doctor's adventures