A hue and cry for Doctor Who 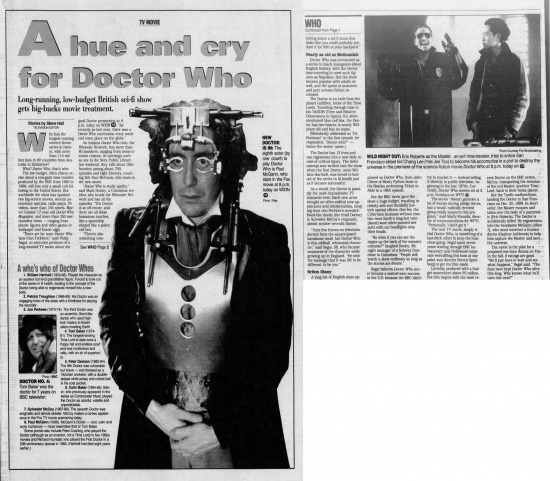 Who has the longest-running science-fiction series in history. with more than 110 million fans In 80 countries from Australia to Zimbabwe?

Who? Doctor Who, that's who.

The low-budget, often cheesy series about a renegade time-traveler. produced by the BBC from 1963 to 1988, still has only a small cult following in the United States. But worldwide the show has sparked two big-screen movies, several anniversary specials, radio plays. 70 videos, more than 150 novels, Marvel Comics' 17-year-old Doctor Who Magazine, and more than 300 merchandise items — ranging from plastic figures and video games to wallpaper and Easter eggs.

"There are far more Doctor Who fans than Trekkers," said Philip Segal, co-executive producer of a long-awaited TV movie about the good Doctor premiering at 8 p.m. today on WXIN 59. "As recently as last year, there was a Doctor Who convention every weekend some place on the globe."

An Indiana Doctor Who club, the Whoosier Network, has more than 80 members, ranging from teens to senior citizens. At meetings such as one in the Nora Public Library last weekend, they talk about their favorites among about 700 episodes and eight Doctors, counting Brit Paul McGann, who stars in the new movie.

"Doctor Who is really quirky." said Mark Dooley, a Columbus resident who heads the Whoosier Network and has all the episodes. 'The Doctor is so off-center, and there are all these humorous touches, like a spaceship shaped like a police call box.

'There's also something comforting about a sci-fi show that looks like you could probably produce it for $50 in your backyard."

Nearly as old as Methuselah

Doctor Who was envisioned as a series to teach youngsters about English history, with the Doctor time-traveling to meet such figures as Napoleon. But the show became popular with adults as well, and the quota of monsters and pure science fiction increased.

The Doctor is an exile from the planet Gallifrey, home of the Time Lords. Traveling through time in his TARDIS (Time and Relative Dimensions in Space), the aforementioned blue call box, the Doctor has two hearts, Is nearly 953 years old and has no name.

(Mistakenly addressed as "Dr. Foreman" in the first episode, he responded, "Doctor who?" —hence the series' name.)

The Doctor has 13 lives and can regenerate into a new body in case of critical injury. The latter concept was written into the show when the first Doctor, actor William Hartnell, was forced to bow out of the series in ill health Just as it became successful.

As a result, the Doctor is possibly the most chameleonic TV character ever. Each new actor brought an often-radical new appearance and interpretation, ranging from Jon Pertwee's eccentric Bond-like dandy (the third Doctor) to Sylvester McCoy's enigmatic, almost sinister seventh Doctor.

"Very few heroes on television deviate from the square-jawed handsome mold, but Doctor Who is this oddball, whimsical character," said Segal, 36, who became enamored of the character while growing up in England. "He sent the message that it was OK to be different, to be you."

A long list of English stars appeared on Doctor Who, from John Cleese of Monty Python fame to the Beatles performing Ticket to Ride in a 1965 episode.

But the BBC never gave the show a huge budget, resulting In rickety sets and decidedly low-tech special effects. One foe, the Cybermen (humans without emotion from Earth's long-lost twin planet) wore silver-painted wet suits with car headlights atop their heads.

"So what if you can see the zipper up the back of the monster costume?" laughed Dooley, 39, night manager of a Subway franchise in Columbus. "People will watch a show endlessly as long as the stories are decent."

Segal believes Doctor Who never became a mainstream success In the U.S. because the BBC didn't try to market it — instead selling it directly to public television, beginning in the late 1970s. Currently, Doctor Who movies air at 2 p.m. Sundays on WFYI.

The series "doesn't generate a lot of money during pledge drives, but a small, radically devoted group really supports this program," said Marty Kinsella, director of communications for WFYI. "Personally, I don't get it."

The new TV movie, simply titled Doctor Who, is something of a last-ditch effort to keep the franchise going. Segal spent seven years wading through BBC bureaucracy and Hollywood corporate reshuffling (his boss at one point was director Steven Spiel-berg) to get the film made.

Lavishly produced with a budget somewhere above 85 million, the film begins with the most recent Doctor on the BBC series, McCoy, transporting the remains of the evil Master, another Time Lord, back to their home planet.

But the Tardis malfunctions, landing the Doctor in San Francisco on Dec. 30, 1999. In short order, the Master escapes and takes over the body of a paramedic (Eric Roberts). The Doctor is accidentally killed. He regenerates into the handsome McGann (Alien 3), who must convince a human doctor (Daphne Ashbrook) to help him capture the Master and save the universe.

The movie Is the pilot for a proposed one-hour drama on Fox in the fall, If ratings are good. "We'll just have to wait and see what happens," Segal said. "The fans have kept Doctor Who alive this long. Who knows what he'll turn into next?"

Caption: NEW DOCTOR IS IN: The eighth actor (by one count) to play Doctor Who is Paul McGann, who stars in the Fox movie at 8 p.m. today on WXIN 59.

Caption: WILD NIGHT OUT: Eric Roberts as the Master, an evil time-traveler, tries to entice San Francisco street kid Chang Lee (Yee Jee Tso) to become his accomplice in a plot to destroy the universe in the premiere of the science-fiction movie Doctor Who at 8 p.m. today on 59.

A who's who of Doctor Whos

1. William Hartnell (1963-66). Played the character as an austere but kind grandfather figure. Forced to bow out of the series in ill health, leading to the concept of the Doctor being able to regenerate himself into a new body.

2. Patrick Troughton (1966-69). His Doctor was an engaging hobo of the skies with a fondness for playing the recorder.

4. Tom Baker (197481). The longest-serving Time Lord to date wore a floppy hat and endless scarf and was mysterious and witty, with an air of superiority.

5. Peter Davison (1982-84). The fifth Doctor was vulnerable but brave — and dressed as a Victorian cricketer, with a double-striped white jersey and cricket ball in his coat pocket.

6. Colin Baker (1984.86). Baker, who previously appeared in the series as Commander Maxil, played the Doctor as colorful, volatile and unpredictable.

Some purists also include Peter Cushing, who played the Doctor (although as an inventor, not a Time Lord) in two 19605 movies and Richard Hurndall, who played the First Doctor in a 20th-anniversary special in 1983. (Hartnell had died eight years earlier.)

Caption: DOCTOR NO. 4: Tom Baker was the doctor for 7 years on BBC television