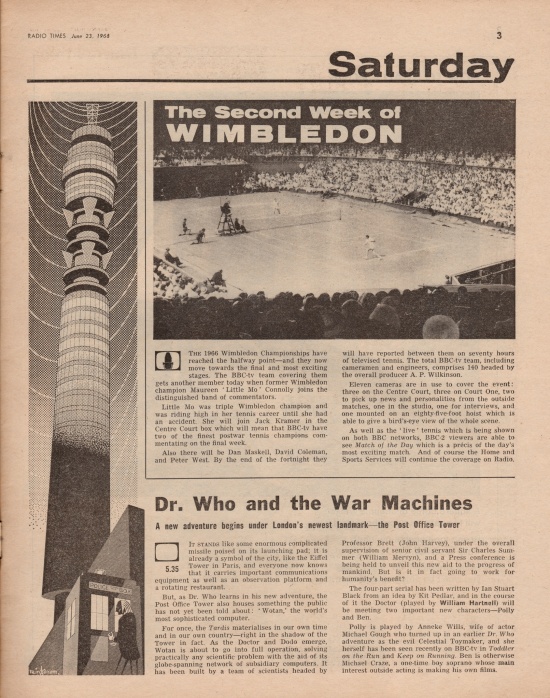 Dr. Who and the War Machines

IT STANDS like some enormous complicated missile poised on its launching pad; it is already a symbol of the city, like the Eiffel Tower in Paris, and everyone now knows that it carries important communications equipment as well as an observation platform and a rotating restaurant.

But, as Dr. Who learns in his new adventure, the Post Office Tower also houses something the public has not yet been told about : 'Wotan,' the world's most sophisticated computer.

For once, the Tardis materialises in our own time and in our own country—right in the shadow of the Tower in fact. As the Doctor and Dodo emerge, Wotan is about to go into full operation, solving practically any scientific problem with the aid of its globe-spanning network of subsidiary computers. It has been built by a team of scientists headed by Professor Brett (John Harvey), under the overall supervision of senior civil servant Sir Charles Summer (William Mervyn), and a Press conference is being held to unveil this new aid to the progress of mankind. But is it in fact going to work for humanity's benefit?

The four-part serial has been written by Ian Stuart Black from an idea by Kit Pedlar, and in the course of it the Doctor (played by William Hartnell) will be meeting two important new characters—Polly and Ben.

Polly is played by Anneke Wills, wife of actor Michael Gough who turned up in an earlier Dr. Who adventure as the evil Celestial Toymaker, and she herself has been seen recently on BBC-tv in Toddler on the Run and Keep on Running. Ben is otherwise Michael Craze, a one-time boy soprano whose main interest outside acting is making his own films.