A showdown for television Time Lord 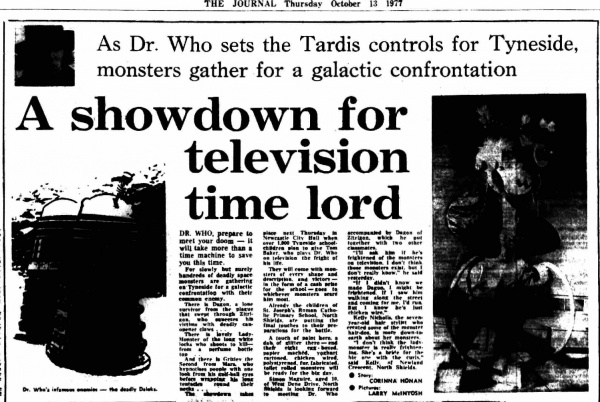 As Dr. Who sets the Tardis controls for Tyneside, monsters gather for a galactic confrontation

Dr. Who, prepare to meet your doom -- it will take more than a time machine can save you this time.

For slowly but surely hundreds of deadly space monsters are gathering on Tyneside for a galactic confrontation with their common enemy.

There is Daxon, a lone survivor from the plague that swept through Zitrigon, who squeezes his victims with deadly can-opener claws.

And there is Grizley the Second from Mars, who hypnotises people with one look from his golf-ball eyes before wrapping him long tentacles around their necks ...

The showdown takes place next Thursday in Newcastle City Hall win over 1,000 Tyneside school-children plan to give Tom Baker, who plays Dr. Who on television, the fright of his life.

They will come with monsters of every shape and description, and victory -- in the form of a cash prize for the school goes to whichever monsters seem him the most.

Already the children of St. Joseph's Roman Catholic Primary School, North Shields, are putting the final touches to their preparations for the battle.

A touch of paint here, a dab of glitter there and their eight egg-boxed papier mached yoghurt carton, chicken wired, polystyrened fur labricated toilet rolled monsters will be ready for the big day.

Simon Maguire, age 19, of West Dene Drive, North Shields is looking forward to meeting Dr. Who accompanied by Dagon of Zitrigon, which he put together with two other classmates.

"I'll ask him if he's frightened of the monsters on television. I don't think those monsters exist, but I don't really know," he said yesterday.

"If I didn't know we made Dagon, I might be frightened. If I saw him walking along the street and coming for me, I'd run. But I know he's just chicken wire."

Kelly Nicholls the seven-year-old hair stylist who created some of the monster hair-dos, is more down-to-earth about her monsters.

"I don't think the lady monster is really frightening. She's a bride for the big one with the Curls, said Kelly, of Newland Crescent, North Shields.