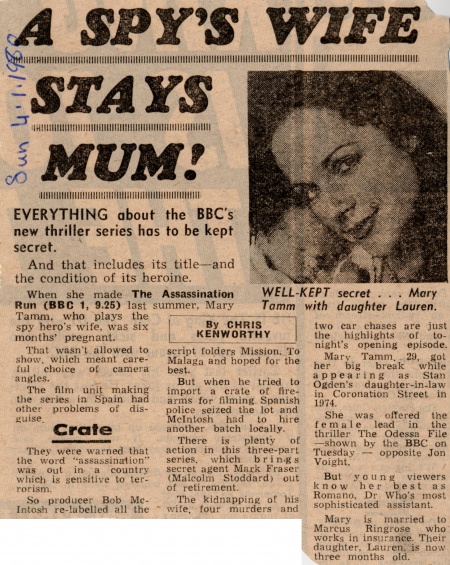 EVERYTHING about the BBC's new thriller series has to be kept secret.

And that includes its title—and the condition of its heroine.

When she made The Assassination Run (BBC 1, 9.25) last summer, Mary Tamm, who plays the hero's wife, was six months' pregnant.

That wasn't allowed to show, which meant careful choice of camera angles.

The film unit making the series in, Spain had other problems of disguise.

They were warned that the word "assassination" was out in a country which is sensitive to terrorism.

So producer Bob McIntosh re-labelled all the script folders Mission To Malaga and hoped for the best.

But when he tried to import a crate of firearms for filming Spanish police seized the lot and McIntosh had to hire another batch locally.

There is plenty of action in this three-part series, which brings secret agent Mark Fraser (Malcolm Stoddard) out of retirement.

The kidnapping of his wife, four murders and two car chases are just the highlights of tonight's opening episode.

Mary Tamm, 29, got her big break while appearing as Stan Ogden's daughter-in-law in Coronation Street in 1974.

She was offered the female lead in the thriller The Odessa File —shown by the BBC on Tuesday — opposite Jon Voight.

But young viewers know her best as Romano, Dr Who's most sophisticated assistant.

Mary is married to Marcus Ringrose who works in insurance. Their daughter, Lauren, is now three months old.