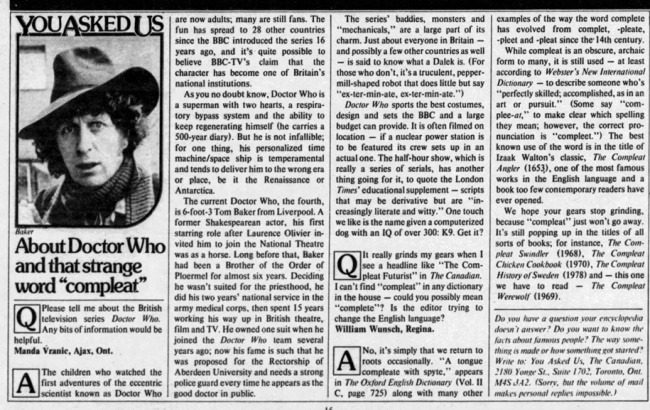 Q Please tell me about the British television series Doctor Who. Any bits of information would be helpful.

A The children who watched the first adventures of the eccentric scientist known as Doctor Who are now adults; many are still fans. The fun has spread to 28 other countries since the BBC introduced the series 16 years ago, and it's quite possible to believe BBC-TV's claim that the character has become one of Britain's national institutions.

As you no doubt know, Doctor Who is a superman with two hearts, a respiratory bypass system and the ability to keep regenerating himself (he carries a 500-year diary). But he is not infallible; for one thing, his personalized time machine/space ship is temperamental and tends to deliver him to the wrong era or place, be it the Renaissance or Antarctica.

The current Doctor Who, the fourth, is 6-foot-3 Tom Baker from Liverpool. A former Shakespearean actor, his first starring role after Laurence Olivier invited him to join the National Theatre was as a horse. Long before that, Baker had been a Brother of the Order of Ploermel for almost six years. Deciding he wasn't suited for the priesthood, he did his two years' national service in the army medical corps, then spent 15 years working his way up in British theatre, film and TV. He owned one suit when he joined the Doctor Who team several years ago; now his fame is such that he was proposed for the Rectorship of Aberdeen University and needs a strong police guard every time he appears as the good doctor in public.

The series' baddies, monsters and "mechanicals," are a large part of its charm. Just about everyone in Britain —and possibly a few other countries as well — is said to know what a Dalek is. (For those who don't, it's a truculent, pepper-mill-shaped robot that does little but say "ex-ter-min-ate, ex-ter-min-ate.")

Doctor Who sports the best costumes, design and sets the BBC and a large budget can provide. It is often filmed on location — if a nuclear power station is to be featured its crew sets up in an actual one. The half-hour show, which is really a series of serials, has another thing going for it, to quote the London Times' educational supplement — scripts that may be derivative but are — increasingly literate and witty." One touch we like is the name given a computerized dog with an IQ of over 300: K9. Get it?