Adoring world, the Doctor will see you now 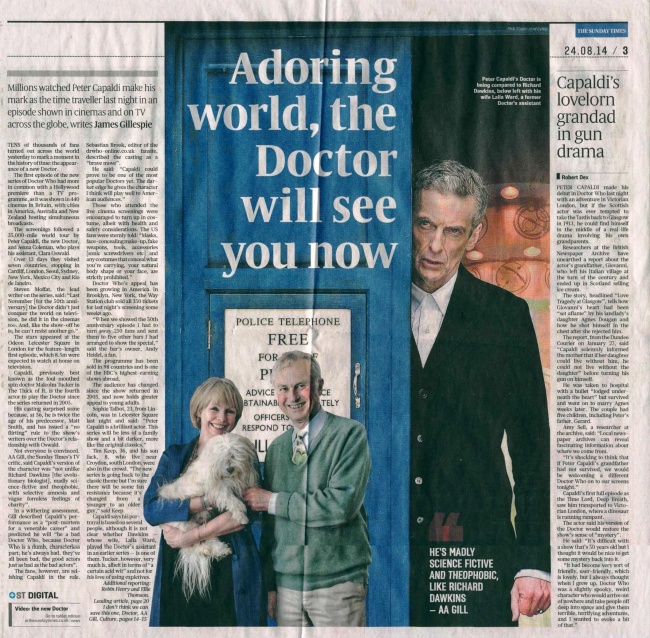 Millions watched Peter Capaldi make his mark as the time traveller last night in an episode shown in cinemas and on TV across the globe, writes James Gillespie

Peter Capaldi's Doctor is being compared to Richard Dawkins, below left with his wife Lalla Ward, a former Doctor's assistant

TENS of thousands of fans turned out across the world yesterday to mark a moment in the history of time: the appearance of a new Doctor.

The first episode of the new series of Doctor Who had more in common with a Hollywood premiere than a TV programme, as it was shown in 440 cinemas in Britain, with cities in America, Australia and New Zealand hosting simultaneous broadcasts.

The screenings followed a 35,000-mile world tour by Peter Capaldi, the new Doctor, and Jenna Coleman, who plays his assistant, Clara Oswald.

Steven Moffat, the lead writer on the series, said: "Last November [for the 50th anniversary] the Doctor didn't just conquer the world on television, he did it in the cinemas too. And, like the show-off he is, he can't resist another go."

The stars appeared at the Odeon Leicester Square in London for the feature-length first episode, which 8.5m were expected to watch at home on television.

Capaldi, previously best known as the foul-mouthed spin doctor Malcolm Tucker in The Thick of It, is the fourth actor to play the Doctor since the series returned in 2005.

His casting surprised some because, at 56, he is twice the age of his predecessor, Matt Smith, and has issued a "no flirting" rule to the show's writers over the Doctor's relationship with Oswald.

Not everyone is convinced. AA Gill, the Sunday Times's TV critic, said Capaldi's version of the character was "not unlike Richard Dawkins [the evolutionary biologist], madly science-fictive and theophobic, with selective amnesia and vague formless feelings of charity".

In a withering assessment, Gill described Capaldi's performance as a "post-mortem for a venerable career" and predicted he will "be a bad Doctor Who, because Doctor Who is a dumb, characterless part; he's always bad, they've all been bad, the good actors just as bad as the bad actors".

The fans, however, are relishing Capaldi in the role. Sebastian Brook, editor of the drwho-online.co.uk fansite, described the casting as a "brave move".

He said: "Capaldi could prove to be one of the most popular Doctors yet. The darker edge he gives the character I think will play well to American audiences."

Those who attended the live cinema screenings were encouraged to turn up in costume, albeit with health and safety considerations. The US fans were sternly told: "Masks, face-concealing make-up, fake weapons, tools, accessories [sonic screwdrivers etc] and any costumes that conceal what you're carrying, your natural body shape or your face, are strictly prohibited."

Doctor Who's appeal has been growing in America. In Brooklyn, New York, the Way Station club sold all 350 tickets for last night's screening some weeks ago.

"When we showed the 50th anniversary episode I had to turn away 250 fans and sent them to five other bars I had arranged to show the special," said the bar's owner, Andy Heidel, a fan.

The programme has been sold in 98 countries and is one of the BBC's highest-earning shows abroad.

The audience has changed since the show returned in 2005, and now holds greater appeal to young adults.

Sophie Talbot, 23, from Lincoln, was in Leicester Square last night and said: "Peter Capaldi is a brilliant actor. This series will be less of a family show and a bit darker, more like the original classics."

Tim Keep, 36, and his son Jack, 8, who live near Croydon, south London, were also in the crowd. "The new series is going back to the classic theme but I'm sure there will be some fan resistance because it's changed from a younger to an older guy," said Keep.

Capaldi says his portrayal is based on several people, although it is not clear whether Dawkins —whose wife, Lalla Ward, played the Doctor's assistant in an earlier series — is one of them. Tucker, however, very much is, albeit in terms of "a certain acid wit" and not for his love of using expletives. Additional reporting: Robin Henry and Ellie Thomson. Leading article, page 20 I don't think we can save this one, Doctor, AA Gill, Culture, pages 14-15

PETER CAPALDI made his debut in Doctor Who last night with an adventure in Victorian London, but if the Scottish actor was ever tempted to take the Tardis back to Glasgow in 1913, he could find himself in the middle of a real life drama involving his own grandparents.

Researchers at the British Newspaper Archive have unearthed a report about the actor's grandfather, Giovanni, who left his Italian village at the turn of the century and ended up in Scotland selling ice cream.

The story, headlined "Love Tragedy at Glasgow", tells how Giovanni's heart had been "set aflame" by his landlady's daughter Agnes Dougan and how he shot himself in the chest after she rejected him.

The report, from the Dundee Courier on January 27, said "Capaldi solemnly informed the mother that if her daughter could live without him, he could not live without the daughter" before turning his gun on himself.

He was taken to hospital with a bullet "lodged underneath the heart" but survived and went on to marry Agnes weeks later. The couple had five children, including Peter's father, Gerard.

Amy Sell, a researcher at the archive, said: "Local newspaper archives can reveal fascinating information about where we come from.

"It's shocking to think that if Peter Capaldi's grandfather had not survived, we would be welcoming a different Doctor Who on to our screens tonight."

Capaldi's first full episode as the Time Lord, Deep Breath, saw him transported to Victorian London, where a dinosaur is running rampant.

The actor said his version of the Doctor would restore the show's sense of "mystery".

He said: "It's difficult with a show that's 50 years old but I thought it would be nice to get some mystery back into it.

"It had become very sort of friendly, user-friendly, which is lowly, but I always thought when I grew up, Doctor Who was a slightly spooky, weird character who would arrive out of nowhere and take people off deep into space and give them terrible, terrifying adventures, and I wanted to evoke a bit of that."