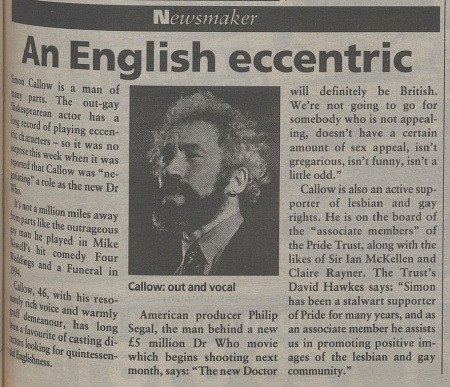 Simon Callow is a man of many parts. The out-gay Shakespearean actor has a long record of playing eccentric characters - so it was no surprise this week when it was reported that Callow was "negotiating" a role as the new Dr Who.

It's not a million miles away from parts like the outrageous gay man he played in Mike Newell's comedy Four Weddings and a Funeral in 1994.

Callow, 46 with his resonantly rich voice and warmly gruff demeanour, has long been a favourite of casting Directors looking for quintessential Englishness.

American producer Philip Segal, the man behind a new £5 million Dr Who movie which begins shooting next month, says: "The new Doctor will definitely be British. We're not going to go for somebody who is not appealing, doesn't have a certain amount of sex appeal, isn't gregarious, isn't funny, isn't a little odd."

Callow is also an active supporter of lesbian and gay rights. He is on the board of the "associate members" of the Pride Trust, along with the likes of Sir Ian McKellen and Claire Rayner. The Trust's David Hawkes says: "Simon has been a stalwart supporter of Pride for many years, and as an associate member he assists us in promoting positive images of the lesbian and gay community."

Caption: Callow: out and vocal