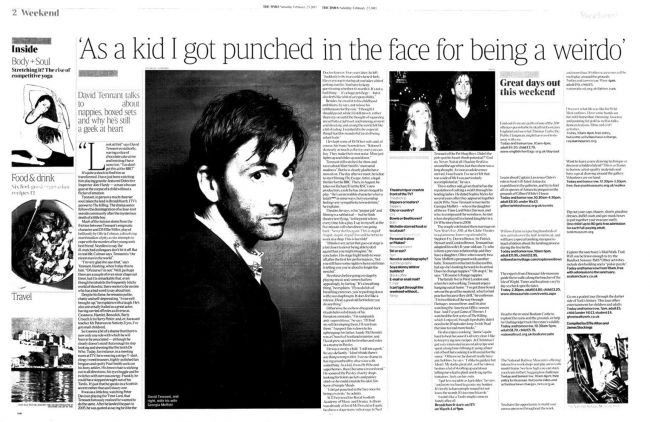 My weekend David Tennant talks to Lydia Slater about nappies, boxed sets and why he's still a geek at heart

"Look at this!" says David Tennant ecstatically, waving a slice of chocolate cake at me and insisting I have some too. "You don't get this at the BBC!"

It's quite a shock to find him so transformed. I have just been watching him playing granite-featured Detective Inspec-tor Alec Hardy - a man who can gaze at the corpse of a child without a flicker of emotion.

Tennant, in person a much cheerier soul, takes the lead in Broadchurch, ITV's answer to The Killing. The drama series follows the disintegration of a close-knit seaside community after the mysterious death of a little boy.

Much of the tension stems from the friction between Tennant's enigmatic character and DS Ellie Miller, played bril-liantly by Olivia Colman, a dissolving marshmallow of pity as she attempts to cope with the murder of her young son's best friend. Needless to say, the ill-matched colleagues don't hit it off. But in real life, Colman says, Tennant is "the nic-est man in the world".

"I'm very glad she says that," says Tennant, blushing, when I relay this to him. "Of course I'm not." Well, perhaps there are a couple of even nicer chaps out there, but it is remarkable that, even though he inhabits the frequently bitchy world of showbiz, there seems to be no one who has a bad word to say about him.

Despite his fame, he remains polite, chatty and self-deprecating. "I was well brought-up," he explains with a laugh. He's also universally hailed as a great actor, having carried off roles as diverse as Casanova, Hamlet, Benedick, Barty Crouch Jr in Harry Potter, and, er, harassed teacher Mr Peterson in Nativity 2 (yes, I've got small children).

So it seems a bit of a shame that there is now only one role with which he will forever be associated - although he clearly doesn't mind that enough to stop looking and dressing like the tenth Dr Who. Today, for instance, in a meeting room at ITV, he is wearing a stripy T-shirt, clingy tweed trousers, highly-polished tan brogues and spotty Paul Smith socks on his bony ankles. His brown hair is sticking out in all directions, his eyes boggle and he twitches with nervous energy. Frankly, he could have stepped straight out of his Tardis. It's just that he speaks in a Scottish accent rather than an Estuary one.

It was as a little boy, watching Peter Davison playing the Time Lord, that Tennant famously realised he wanted to do the same. After he landed the part in 2005, he was quoted as saying he'd be the Doctor forever. Five years later, he left. "Suddenly to be in a world where it feels like everyone is staring at you takes a bit of getting used to. You have to keep questioning whether it's worth it. It's not a bad thing - it's a huge privilege - but it also feels like a bit of a responsibility."

Besides, he owed it to his childhood ambitions, he says, not to lose his enthusiasm for the role. "I thought I should go out while I'd still miss it, rather than stay on until the thought of squeezing myself into a tight suit and running around and shouting and saving the world felt like a bit of a drag. I wanted it to be a special thing I had this wonderful treat of being asked to do."

He's kept some of Dr Who's suits and, of course, his Sonic Screwdriver. "It doesn't do nearly as much as the toy ones you can buy. They make their own noise. Mine just lights up and slides up and down."

Tennant still watches the show and raves about Matt Smith's "mercurial madness". But he is clearly glad to have moved on. The day after we meet, he is due to start filming The Escape Artist, a legal thriller for the BBC. Then, in Au-gust, he takes on Richard II in the RSC's new production, a role he has always longed to play. "He's an incredible char-acter who's a total t*** in some ways, but you end up feeling very sympathetic towards him," he explains.

Theatre, he says, is his "proper job" and filming is a sabbatical - but he finds theatre terrifying, "to the point where, eve-ry time I do a play, I say to myself, at the five minute call when there's no going back: 'Never do this again. This is stu-pid! Stupid, stupid, stupid! It would be better to work in a shop. This is horrible!'

"I think every actor that goes on stage is a lot closer to never being able to do it again than you might imagine," he con-cludes. His stage fright tends to wear off after the first few performances, "but you still have some nights when your brain is telling you you're about to forget the next bit".

He relaxes before going on stage by playing music and, somewhat less appealingly, by farting. "It's a breathing thing," he explains. "If you do lots of breathing exercises, you're pushing down with your diaphragm. It does feel like a release, I find, a good old fart before you do anything."

Otherwise, he eschews the good-luck rituals beloved of many of his thespian comrades. "I'm rampantly an-ti-superstitious," he says. "If I find myself developing them, I'll run from them." I suspect this is down to his upbringing: his father, Sandy McDonald, was a Church of Scotland minister, and David grew up with his brother and sister in a manse in Paisley.

He was a swotty child. "I still am a geek," he says defiantly. "I don't think there's anything wrong with it. I see no shame in having an unhealthy obsession with something. As a kid, it was Dr Who and superheroes, then I became a record nerd." He scoured the Paisley charity shops looking for bolero jackets and paisley shirts so he could emulate his idol, Jim Kerr of Simple Minds.

"I did get punched in the face once for being a weirdo," he admits.

At 17, he joined the Royal Scottish Academy of Music and Drama. As there was already a David McDonald in Equity, he chose a stage name in homage to Neil Tennant of the Pet Shop Boys. Didn't the girls spot his heart-throb potential? "God no. Never. Not at all. I had my first kiss around the age of ten, but then there was a long drought. As soon as ado-lescence arrived, I was frozen. I've never felt that was a side of life I was particularly accomplished at," he says.

This is rather odd, given that he has the reputation of cutting a swath through his leading ladies. He dated Sophia Myles for several years after they appeared together on Dr Who. Now Tennant is married to Georgia Moffett - who is the daughter of the ex-Time Lord Peter Davison, and who, to compound the weirdness, he met when she played his cloned daughter in a Dr Who storyline in 2008.

The couple celebrated their marriage on New Year's Eve, 2011, at the Globe Theatre in a glamorous knees-up attended by Stephen Fry, Derren Brown, Sir Patrick Stewart and Gordon Brown. Tennant has adopted his wife's 11-year-old son, Ty, who is from a previous relationship, and they have a daughter, Olive, who is nearly two. Now Moffett is pregnant with another baby. Tennant is reluctant to discuss this, but says he's looking forward to its arrival. Does he change nap-pies? "Oh stop it," he says. "Of course I change nappies."

The family live in West London and, when he's not working, Tennant enjoys hanging out at home. "I've got three boxed sets on the go at the moment, which is bad practice because they drift," he confesses. "I'm two thirds of the way through Damages, season three, and I'm also watching the American Office, season four. And I've got Game of Thrones. I watched the first series of The Killing, which I enjoyed, though it probably didn't need to be 20 episodes long. I wish I had the time to read more books."

He also enjoys cooking. "Jamie's quite hard to beat because it's all very clear. I like to keep trying new recipes. At Christmas I got very interested in an oxtail recipe and spent a long time refining it, using a finer cut of beef but cooking it with oxtail for the sauce." Otherwise, he doesn't really have any hobbies, he says. "I'd like to garden, but I don't. My dad is great at it, so if he's down he does a lot of strolling up and down telling me what to plant and tying up the toma-toes. I rely on his visits.

"I get less sociable as I get older," he says, "and more inclined to go into my bunker. It's lovely to have people round but not leave the womb. It's too much hassle."

Broadchurch starts on ITV on March 4 at 9pm

Theatre trip or crash in front of the TV?

I can't get through the weekend without...