BBC rolls out the hype in Doctor Who reveal 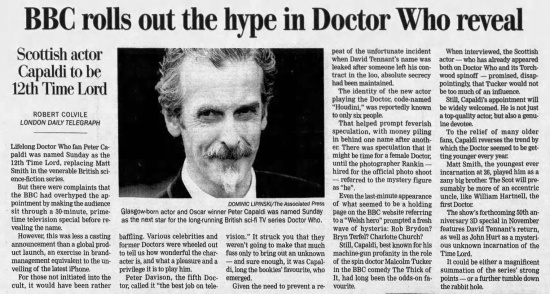 But there were complaints that the BBC had overhyped the appointment by making the audience sit through a 30-minute, prime-time television special before revealing the name.

However, this was less a casting announcement than a global product launch, an exercise in brand-management equivalent to the unveiling of the latest iPhone.

For those not initiated into the cult, it would have been rather baffling. Various celebrities and former Doctors were wheeled out to tell us how wonderful the character is, and what a pleasure and a privilege it is to play him.

Peter Davison, the fifth Doctor, called it "the best job on tele vision." It struck you that they weren't going to make that much fuss only to bring out an unknown — and sure enough, it was Capaldi, long the bookies' favourite, who emerged.

Given the need to prevent a repeat of the unfortunate incident when David Tennant's name was leaked after someone left his contract in the loo, absolute secrecy had been maintained.

The identity of the new actor playing the Doctor, code-named "Houdini," was reportedly known to only six people.

That helped prompt feverish speculation, with motley piling in behind one name after another. There was speculation that it might be time for a female Doctor, until the photographer Rankin —hired for the official photo shoot — referred to the mystery figure as "he".

Even the last-minute appearance of what seemed to be a holding page on the BBC website referring to a "Welsh hero" prompted a fresh wave of hysteria: Rob Brydon? Bryn Terfel? Charlotte Church?

Still, Capaldi, best known for his machine-gun profanity in the role of the spin doctor Malcolm Tucker in the BBC comedy The Thick of It, had long been the odds-on favourite.

When interviewed, the Scottish actor — who has already appeared both on Doctor Who and its Torch-wood spinoff — promised, disappointingly, that Tucker would not be too much of an influence.

Still, Capaldi's appointment will be widely welcomed. He is not just a top-quality actor, but also a genuine devotee.

To the relief of many older fans, Capaldi reverses the trend by which the Doctor seemed to be getting younger every year.

Matt Smith, the youngest ever incarnation at 26, played him as a zany big brother. The Scot will presumably be more of an eccentric uncle, like William Hartnell, the first Doctor.

It could be either a magnificent summation of the series' strong points — or a further tumble down the rabbit hole.

Caption: Glasgow-born actor and Oscar winner Peter Capaldi was named Sunday as the next star for the long-running British sci-fi TV series Doctor Who.