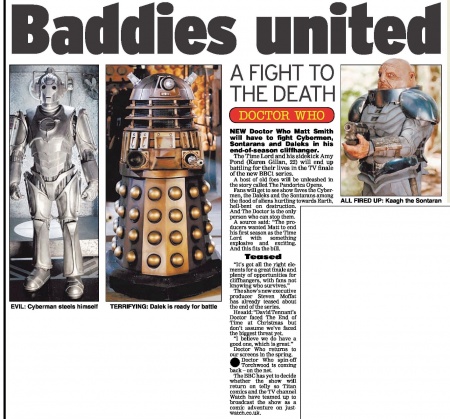 A FIGHT TO THE DEATH

NEW Doctor Who Matt Smith will have to fight Cybermen, Sontarans and Daleks in his end-of-season cliffhanger.

The Time Lord and his sidekick Amy Pond (Karen Gillen, 22) will end up battling for their lives in the TV finale of the new BBC1 series.

A host of old foes will be unleashed in the story called The Pandorica Opens.

Fans will get to see show faves the Cybermen, the Daleks and the Sontarans among the flood of aliens hurtling towards Earth, hell-bent on destruction.

And The Doctor is the only person who can stop them.

A source said: "The producers wanted Matt to end his first season as the Time Lord with something explosive and exciting. And this fits the bill.

"It's got all the right elements for a great finale and plenty of opportunities for cliffhangers, with fans not knowing who survives."

The show's new executive producer Steven Moffat has already teased about the end of the series.

He said: "David Tennant's Doctor faced The End of Time at Christmas but don't assume we've faced the biggest threat yet.

"I believe we do have a good one, which is great."

Doctor Who returns to our screens in the spring. ilk Doctor Who spin-off

Torchwood is coming back — on the net.

The BBC has yet to decide whether the show will return on telly so Titan comics and the TV channel Watch have teamed up to broadcast the show as a comic adventure on just-watch.co.uk.

Caption: ALL FIRED UP: Kaagh the Sontaran