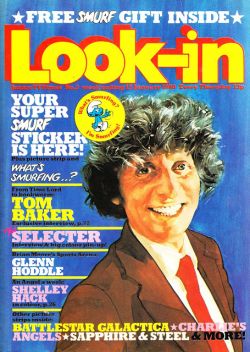 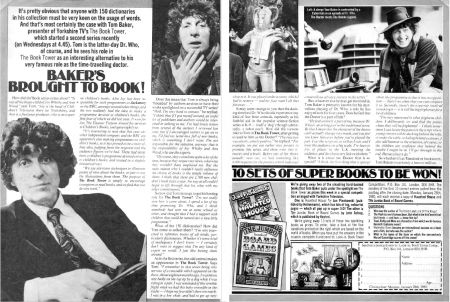 It's pretty obvious that anyone with 150 dictionaries in his collection must be very keen on the usage of words. And that's most certainly the case with Tom Baker, presenter of Yorkshire TV's The Book Tower, which started a second series recently (on Wednesdays at 4.45). Tom is the latter-day Dr. Who, of course, and he sees his role in The Book Tower as an interesting alternative to his very famous role as the time-travelling doctor.

How did the Book series come about? "It was all the brain-child of Joy Whitby and Ann Wood," said Tom. "Joy is the head of Children's Television there (at Yorkshire), and Ann is a freelance producer, who is an expert on children's books. Also Joy has been responsible for such programmes as Jackanory on the BBC, amongst several other things, and the two suddenly had the idea to make c programme devoted to children's books, the first four of which we did last year. It won fat Joy The Eleanor Farjeon Award for services to Children's Books, and quite rightly so.

"It's interesting to note that this year am other independent company and the BBC art apparently also making programmes on children's books, so it has proved to be a marvellous idea, judging from the response and the audience figures we've had. There had never been a children's programme devoted entirely to children's books, and treated in a slightly fantastical way:

"We use television techniques to illustrate points of view about the books, or just to use the illustrations from them. The purpose of The Book Tower is simply to encourage youngsters to read books, and we find that out devices work."

Does this mean that Tom is always being 'hounded' by authors anxious to have their works spotlighted on a successful TV series: "Well, I'm very hard to contact," he replied. "I think that if I put myself around, an awful lot of publishers and authors would be interested in talking to me. I've had lovely letters from several of the authors I reviewed last year, but if I encouraged writers to get on to me, I'd find my letter-box full of new books, which is something I don't want. I'm not responsible for the selection, anyway; that is I the responsibility of Joy Whitby and Ann Wood, who are the experts.

"Of course, they consult me quite a lot of the time, because they respect my views, otherwise they wouldn't have employed me. But the main reason why I couldn't really influence the choice of books is the simple volume of them: I think that there are 1,700 new children's book titles a year. No way at all could I begin to sift through that lot, what with my other commitments."

So how did Tom manage to get his hosting role for The Book Tower? "I'm not really sure how it came about. I spend a lot of my time promoting Dr. Who, and I think somebody had seen me at some school or other, and thought that I had a rapport with children that could be turned into a nice little programme.

What of the 150 dictionaries? How did Tom come to collect them? "I'm very interested in reference books of all kinds, particularly dictionaries. Whether it's some kind of inadequacy I don't know — I certainly don't want to suggest that I'm any kind of expert on words. I just like having them around."

As in the first series, the odd animal makes an appearance in The Book Tower. Says Tom: "I remember in that series being very nervous of a crocodile which appeared on the show. About eighteen months ago, I was bitten very badly on the top lip by a dog while I was sitting in a pub. I was reminded of this terrible fright when we had this baby crocodile in the studio - I hope my fear didn't show too much. I was in a low chair, and had to get up very Close to it. I was placed under cover, which I had removed and my face wasn't all that far away.

It may seem strange to you that the dashing Time Lord Dr. Who should experience any kind of fear from animals, especially as his faithful aid in the popular science-fiction series is K-9 - itself a dog (though admittedly, of robot one!) How did the viewers take to Tom in The Book Tower, after getting so used to him as the Doctor? "The reaction was utterly, utterly positive," he replied. "For example, we put out rather nice posters to promote the series, and these went into libraries and schools. Before any of the shows actually went out we had something like 8,000 requests for the posters, which indicated marvelous advance interest in the series.

But, whatever else you may get involved in, Tom Baker is primarily known for his marvelous playing of Dr. Who, a role he has enjoyed now for four years. Does he feel that the Doctor is part of him?

"He feels entirely part of me, because Dr. Who is an acting part in the traditional sense. By that I mean that the character of the doctor can't actually change very much, and you feel you know him even before you've played the part. I act the script out as well as I can, and I meet the audience on a big scale; I've been to lots of places in the UK meeting the audience, and the character clicks with them.

What is it about the Doctor that is so special? "I think the first thing that is special about the programme is that it has no opposition there's no other that you can compare it too. Secondly, there's the expertise in making it - it is still the big frightener for a lot of children.

"I'm very interested in what frightens children. I deliberately try to find the points where they will be frightened - I think sometimes I can locate the points in the script where young viewers will be ducking behind the sofa, or under the table, or hiding behind cushions. I also had humor to the situation, of course, so the children are confident that behind the trouble I might be end, I'll get through it in the end. Heroes always do."

So whether it's as Time Lord or bookworm, Tom Baker is certainly a hero to million.

We're giving away two of the smashing hard-back books that Tom Baker puts under the spotlight in The Book Tower as prizes this week in a special competition arranged by Yorkshire Television.

One is Haunted House by Jan Pienkowski (published by Heinemann), which has a lot of big, colourful pages which all pop up in super 3-D! The other one is The Jumblo Book of Board Games by John Astrop, which is published by Kestrel.

We're giving away 10 sets of these two sparkling books as prizes. To enter, take a look at the five questions printed on the right which are based on the world of books. When you have put the answers and the coupon, completed and send it to: Look-in, Book Tower Competition, P.O. Box 141, London, SE6 3HR. The senders of the first 10 correct entries pulled from the postbag after closing date, Monday, January 28, 1980, will receive a copy of Haunted House and The Jumbo Book of Board Games.