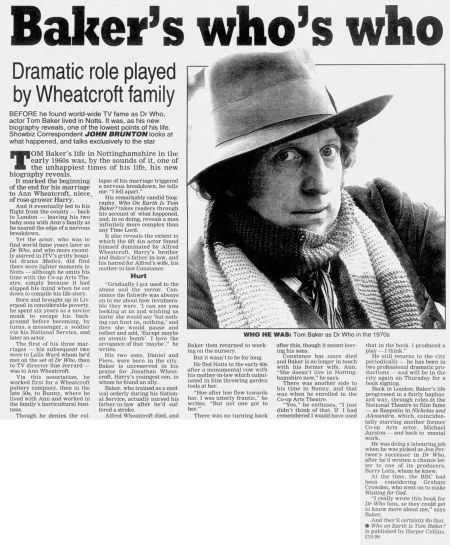 BEFORE he found world-wide TV fame as Dr Who, actor Tom Baker lived in Notts. It was, as his new biography reveals, one of the lowest points of his life. Showbiz Correspondent JOHN BRUNTON looks at what happened, and talks exclusively to the star

TOM Baker's life in Nottinghamshire in the early 1960s was, by the sounds of it, one of the unhappiest times of his life, his new biography reveals.

It marked the beginning of the end for his marriage to Ann Wheatcroft, niece of rose-grower Harry.

And it eventually led to his flight from the county — back to London — leaving his two baby sons with Ann's family as he neared the edge of a nervous breakdown.

Yet the actor, who was to find world fame years later as Dr Who, and who more recently starred in ITV's gritty hospital drama Medics, did find there were lighter moments in Notts — although he omits his time with the Co-op Arts Theatre, simply because it had slipped his mind when he sat down to compile his life-story.

Born and brought up in Liverpool in considerable poverty, he spent six years as a novice monk to escape his background before becoming, by turns, a messenger, a soldier via his National Service, and later an actor.

The first of his three marriages — his subsequent two were to Lalla Ward whom he'd met on the set of Dr Who, then to TV director Sue Jerrard — was to Ann Wheatcroft.

Via this association, he worked first for a Wheatcroft pottery company, then in the late 50s, to Bunny, where he lived with Ann and worked in the family's horticultural business.

Though he denies the collapse of his marriage triggered a nervous breakdown, he tells me: "I fell apart."

His remarkably candid biography, Who On Earth Is Tom Baker? takes readers through his account of what happened, and, in so doing, reveals a man infinitely more complex than any Time Lord.

It also reveals the extent to which the 6ft 4in actor found himself dominated by Alfred Wheatcroft, Harry's brother and Baker's father-in-law, and his hatred for Alfred's wife, his mother-in-law Constance.

"Gradually I got used to the abuse and the terror. Constance the fishwife was always on to me about how invulnerable they were. 'I can see you looking at us and wishing us harm' she would say tut nothing can hurt us, nothing,' and then she would pause and reflect and add, 'Except maybe an atomic bomb'. I love the arrogance of that 'maybe'," he writes.

His two sons, Daniel and Piers, were born in the city. Baker is unreserved in his praise for Jonathan Wheat-croft, Harry's youngest son, in whom he found an ally.

Baker, who trained as a medical orderly during his National Service, actually nursed his father-in-law after he'd suffered a stroke.

Alfred Wheatcroft died, and Baker then returned to working on the nursery.

But it wasn't to be for long.

He fled Notts in the early 60s after a monumental row with his mother-in-law which culminated in him throwing garden tools at her.

"Hoe after hoe flew towards her. I was utterly frantic," he writes. "But not one got to her."

There was no turning back after this, though it meant leaving his sons.

Constance has since died and Baker is no longer in touch with his former wife, Ann. "She doesn't live in Nottinghamshire now," he says.

There was another side to his time in Bunny, and that was when he enrolled in the Co-op Arts Theatre.

"Yes," he enthuses, "I just didn't think of that. If I had remembered I would have used that in the book. I produced a play — I think."

He still returns to the city periodically — he has been in two professional dramatic productions — and will be in the city again on Thursday for a book signing.

Back in London, Baker's life progressed in a fairly haphazard way, through roles at the National Theatre to film fame — as Rasputin in Nicholas and Alexandra, which, coincidentally starring another former Co-op Arts actor, Michael Jayston — and back to menial work.

He was doing a labouring job when he was picked as Jon Pertwee's successor in Dr Who, after he'd written a chance letter to one of its producers, Barry Letts, whom he knew.

At the time, the BBC had been considering Graham Crowden, who went on to make Waiting for God.

"I really wrote this book for Dr Who fans, so they could get to know more about me," says Baker.

And they'll certainly do that.

Who on Earth is Tom Baker? is published by Harper Collins, £19.99