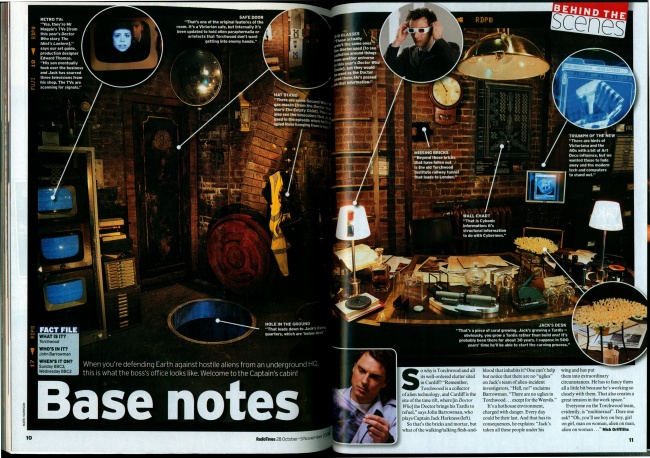 When you're defending Earth against hostile aliens from an underground HQ, this is what the boss's office looks like. Welcome to the Captain's cabin!

So why is Torchwood and all its well-ordered clutter sited in Cardiff? "Remember, Torchwood is a collector of alien technology, and Cardiff is the site of the time rift, where [in Doctor Who] the Doctor brings his Tardis to refuel," says John Barrowman, who plays Captain Jack Harkness (left).

So that's the bricks and mortar, but what of the walking/talking flesh-and-blood that inhabits it? One can't help but notice that there are no "uglies" on Jack's team of alien-incident investigators, "Hell, no!" exclaims Barrowman. "There are no uglies in Torchwood ... except for the Weevils."

It's a hothouse environment, charged with danger. Every day could be their last. And that has its consequences, he explains: "Jack's taken all these people under his wing and has put them into extraordinary circumstances. He has to fancy them all a little bit because he's working so closely with them. That also creates a great tension in the work space." Everyone on the Torchwood team, evidently, is "multisexual". Dare one ask? "Oh, you'll see boy on boy, girl on girl, man on woman, alien on man, alien on woman ..."

"Yes, they're Mr Magpie's TVs [from this year's Doctor Who story The Idiot's Lantern]," says our set guide, production designer Edward Thomas. "His son eventually took over the business and Jack has sourced three televisions from his shop. The TVs are scanning for signals."

"That's one of the original features of the room. It's a Victorian safe, but internally it's been updated to hold alien paraphernalia or artefacts that Torchwood don't want getting into enemy hands."

"There are some Second World War gas masks [from the Doctor Who story The Empty Child]. also see the binoculars that were used in the episode when he spied Rose hanging from a rope.

HOLE IN THE GROUND

"That leads down to Jack's living quarters, which are below deck."

"Those actually aren't the same one the Doctor used [to see radiation around things 'from another universe 'n this year's Doctor Who 'finale], but they would be used as the Doctor used them. He's passed on that information."

"Beyond those bricks! that have fallen out is the old Torchwood Institute railway tunnel that leads to London."

TRIUMPH OF THE NEW "There are hints of Victoriana and the 40s with a bit of Art Deco influence, but we wanted those to fade away and the modern tech and computers to stand out."

"That is Cybonic information: it's structural information to do with Cybermen."

JACK'S DESK "That's a piece of coral growing. Jack's growing a Tardis — obviously, you grow a Tardis rather than build one! It's probably been there for about 30 years. I suppose in 500 years' time he'll be able to start the carving process."