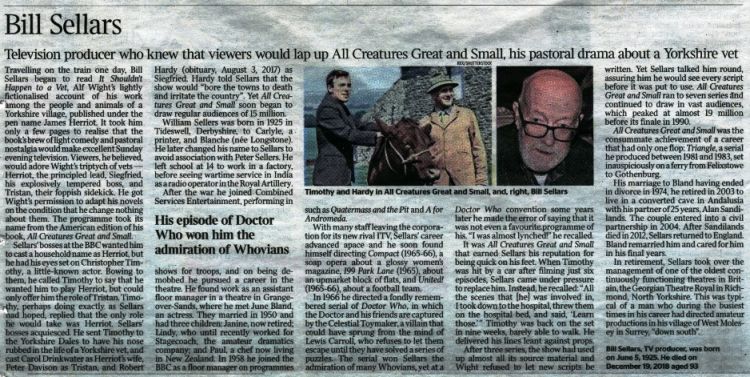 Television producer who knew that viewers would lap up A11 Creatures Great and Small, his pastoral drama about a Yorkshire vet

Timothy and Hardy In All Creatures Great and Small, and, right, Bill Sellars

Travelling on the train one day, Bill Sellars began to read It Shouldn't Happen to a Vet, Alf Wight's lightly fictionalised account of his work among the people and animals of a Yorkshire village, published under the pen name James Herriot. It took him only a few pages to realise that the book's brew of light comedy and pastoral nostalgia would make excellent Sunday evening television. Viewers, he believed, would adore Wight's triptych of vets —Herriot, the principled lead, Siegfried, his explosively tempered boss, and Tristan, their foppish sidekick. He got Wight's permission to adapt his novels on the condition that he change nothing about them. The programme took its name from the American edition of his book, All Creatures Great and Small.

Sellars' bosses at the BBC wanted him to cast a household name as Herriot, but he had his eyes set on Christopher Timothy, a little-known actor. Bowing to them, he called Timothy to say that he wanted him to play Herriot, but could only offer him the role of Tristan. Timothy, perhaps doing exactly as Sellars had hoped, replied that the only role he would take was Herriot. Sellars' bosses acquiesced. He sent Timothy to the Yorkshire Dales to have his nose rubbed in the life of a Yorkshire vet, and cast Carol Drinkwater as Herriot's wife, Peter Davison as Tristan, and Robert Hardy (obituary, August 3, 2017) as Siegfried. Hardy told Sellars that the show would "bore the towns to death and irritate the country". Yet All Creatures Great and Small soon began to draw regular audiences of 15 million.

William Sellers was born in 1925 in Tideswell, Derbyshire, to Carlyle, a printer, and Blanche (née Longstone). He later changed his name to Sellars to avoid association with Peter Sellers. He left school at 14 to work in a factory, before seeing wartime service in India as a radio operator in the Royal Artillery.

After the war he joined Combined Services Entertainment, performing in shows for troops, and on being demobbed he pursued a career in the theatre. He found work as an assistant floor manager in a theatre in Grange-over-Sands, where he met June Bland, an actress. They married in 1950 and had three children: Janine, now retired; Lindy, who until recently worked for Stagecoach, the amateur dramatics company; and Paul, a chef now living in New Zealand. In 1958 he joined the BBC as a floor manager on programmes such as Quatermass and the Pit and A for Andromeda.

With many staff leaving the corporation for its new rival ITV, Sellars' career advanced apace and he soon found himself directing Compact (1965-66), a soap opera about a glossy women's magazine, 199 Park Lane (1965), about an upmarket block of flats, and United! (1965-66), about a football team.

In 1966 he directed a fondly remembered serial of Doctor Who, in which the Doctor and his friends are captured by the Celestial Toymaker, a villain that could have sprung from the mind of Lewis Carroll, who refuses to let them escape until they have solved a series of puzzles. The serial won Sellars the admiration of many Whovians, yet at a Doctor Who convention some years later he made the error of saying that it was not even a favourite programme of his. "I was almost lynched!" he recalled.

It was All Creatures Great and Small that earned Sellars his reputation for being quick on his feet. When Timothy was hit by a car after filming just six episodes, Sellars came under pressure to replace him. Instead, he recalled: "All the scenes that [he] was involved in, I took down to the hospital, threw them on the hospital bed, and said, 'Learn those." Timothy was back on the set in nine weeks, barely able to walk. He delivered his lines leant against props.

After three series, the show had used up almost all its source material and Wight refused to let new scripts be written. Yet Sellars talked him round, assuring him he would see every script before it was put to use. All Creatures Great and Small ran to seven series And continued to draw in vast audiences, which peaked at almost 19 million before its finale in 1990.

All Creatures Great and Small was the consummate achievement of a career that had only one flop: Triangle, a serial he produced between 1981 and 1983, set inauspiciously on a ferry from Felixstowe to Gothenburg.

His marriage to Bland having ended in divorce in 1974, he retired in 2003 to live in a converted cave in Andalusia with his partner of 25 years, Alan Sandilands. The couple entered into a civil partnership in 2004. After Sandilands died in 2012, Sellars returned to England. Bland remarried him and cared for him in his final years.

In retirement, Sellars took over the management of one of the oldest continuously functioning theatres in Britain, the Georgian Theatre Royal in Richmond, North Yorkshire. This was typical of a man who during the busiest times in his career had directed amateur productions in his village of West Molesey in Surrey, "down south".