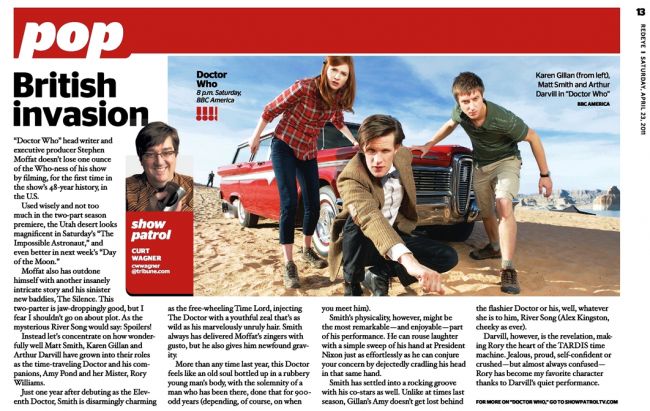 "Doctor Who" head writer and executive producer Stephen Moffat doesn't lose one ounce of the Who-ness of his show by filming, for the first time in the show's 48-year history, in the U.S.

Used wisely and not too much in the two-part season premiere, the Utah desert looks magnificent in Saturdays "The Impossible Astronaut," and even better in next week's "Day of the Moon."

Moffat also has outdone himself with another insanely intricate story and his sinister new baddies, The Silence. This two-parter is jaw-droppingly good, but I fear I shouldn't go on about plot. As the mysterious River Song would say: Spoilers!

Instead lees concentrate on how wonderfully well Matt Smith, Karen Gillan and Arthur Darvill have grown into their roles as the time-traveling Doctor and his companions, Amy Pond and her Mister, Rory Williams.

Just one year after debuting as the Eleventh Doctor, Smith is disarmingly charming as the free-wheeling Time Lord, injecting The Doctor with a youthful zeal that's as wild as his marvelously unruly hair. Smith always has delivered Moffat's zingers with gusto, but he also gives him newfound gravity

More than any time last year, this Doctor feels like an old soul bottled up in a rubbery young man's body, with the solemnity of a man who has been there, done that for 900-odd years (depending, of course, on when you meet him).

Smith's physicality, however, might be the most remarkable—and enjoyable—part of his performance. He can rouse laughter with a simple sweep of his hand at President Nixon just as effortlessly as he can conjure your concern by dejectedly cradling his head in that same hand.

Smith has settled into a rocking groove with his co-stars as well. Unlike at times last season, Gillan's Amy doesn't get lost behind the flashier Doctor or his, well, whatever she is to him, River Song (Alex Kingston, cheeky as ever).

Darvill, however, is the revelation, making Rory the heart of the TARDIS time machine. Jealous, proud, self-confident or crushed—but almost always confused—Rory has become my favorite character thanks to Darvill's quiet performance.

FOR MORE ON "DOCTOR WHO," GO TO SHOWPATROLTV.COM

Caption: Karen Gillan (from left), Matt Smith and Arthur Darvill in "Doctor Who"