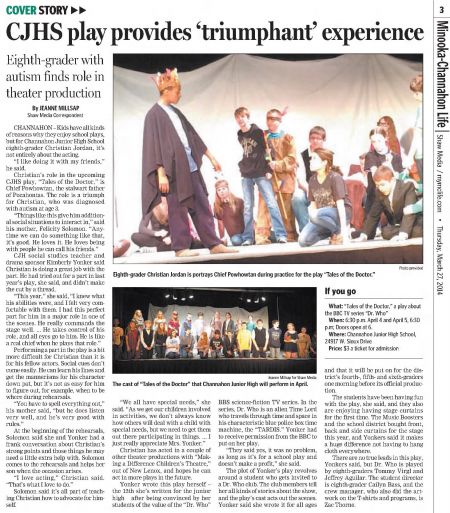 CHANNAHON - Kids have all kinds of reasons why they enjoy school plays, but for Channahon Junior High School eighth-grader Christian Jordan, it's not entirely about the acting.

"I like doing it with my friends," he said.

Christian's role in the upcoming CJHS play, "Tales of the Doctor," is Chief Powhowtan, the stalwart father of Pocahontas. The role is a triumph for Christian, who was diagnosed with autism at age 3.

"Things like this give him additional social situations to interact in," said his mother, Felicity Solomon. "Anytime we can do something like that, it's good. He loves it. He loves being with people he can call his friends."

CJH social studies teacher and drama sponsor Kimberly Yonker said Christian is doing a great job with the part. He had tried out for a part in last year's play, she said, and didn't make the cut by a thread.

"This year," she said, "I knew what his abilities were, and I felt very comfortable with them. I had this perfect part for him in a major role in one of the scenes. He really commands the stage well. ... He takes control of his role, and all eyes go to him. He is like a real chief when he plays that role."

Performing a part in the play is a bit more difficult for Christian than it is for his fellow actors. Social cues don't come easily. He can learn his lines and get the mannerisms for his character down pat, but it's not as easy for him to figure out, for example, when to be where during rehearsals.

"You have to spell everything out," his mother said, "but he does listen very well, and he's very good with rules."

At the beginning of the rehearsals, Solomon said she and Yonker had a frank conversation about Christian's strong points and those things he may need a little extra help with. Solomon comes to the rehearsals and helps her son when the occasion arises.

"I love acting," Christian said. "That's what I love to do."

Solomon said it's all part of teaching Christian how to advocate for himself.

"We all have special needs," she said. "As we get our children involved in activities, we don't always know how others will deal with a child with special needs, but we need to get them out there participating in things. ... I just really appreciate Mrs. Yonker."

Christian has acted in a couple of other theater productions with "Making a Difference Children's Theatre," out of New Lenox, and hopes he can act in more plays in the future.

Yonker wrote this play herself the 12th she's written for the junior high - after being convinced by her students of the value of the "Dr. Who" BBS science-fiction TV series. In the series, Dr. Who is an alien Time Lord who travels through time and space in his characteristic blue police box time machine, the "TARDIS." Yonker had to receive permission from the BBC to put on her play.

"They said yes, it was no problem, as long as it's for a school play and doesn't make a profit," she said.

The plot of Yonker's play revolves around a student who gets invited to a Dr. Who club. The club members tell her all kinds of stories about the show, and the play's cast acts out the scenes. Yonker said she wrote it for all ages and that it will be put on for the district's fourth-, fifth- and sixth-graders one morning before its official production.

The students have been having fun with the play, she said, and they also are enjoying having stage curtains for the first time. The Music Boosters and the school district bought front, back and side curtains for the stage this year, and Yonkers said it makes a huge difference not having to hang cloth everywhere.

There are no true leads in this play, Yonkers said, but Dr. Who is played by eighth-graders Tommy Virgl and Jeffrey Aguilar. The student director is eighth-grader Cailyn Bass, and the crew manager, who also did the artwork on the T-shirts and programs, is Zac Thorne.

What: "Tales of the Doctor," a play about the BBC TV series "Dr. Who"

Price: $3 a ticket for admission

Caption: Eighth-grader Christian Jordan is portrays Chief Powhowtan during practice for the play "Tales of the Doctor."

Caption: The cast of "Tales of the Doctor" that Channahon Junior High will perform in April.