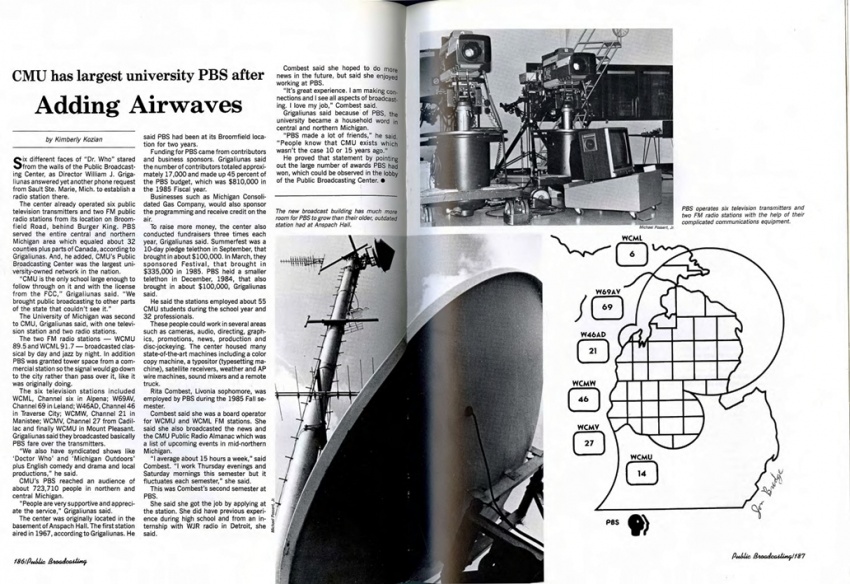 Six different faces of "Dr. Who" stared from the walls of the Public Broadcasting Center, as Director William J. Grigaliunas answered yet another phone request from Sault Ste. Marie, Mich. to establish a radio station there.

The center already operated six public television transmitters and two FM public radio stations from its location on Broomfield Road, behind Burger King. PBS served the entire central and northern Michigan area which equaled about 32 counties plus parts of Canada, according to Grigaliunas. And, he added, CMU's Public Broadcasting Center was the largest university-owned network in the nation.

"CMU is the only school large enough to follow through on it and with the license from the FCC," Grigaliunas said. "We brought public broadcasting to other parts of the state that couldn't see it."

The University of Michigan was second to CMU, Grigaliunas said, with one television station and two radio stations.

The two FM radio stations — WCMU 89.5 and WCML 91.7 — broadcasted classical by day and jazz by night. In addition PBS was granted tower space from a commercial station so the signal would go down to the city rather than pass over it, like it was originally doing.

"We also have syndicated shows like 'Doctor Who' and 'Michigan Outdoors' plus English comedy and drama and local productions," he said.

CMU's PBS reached an audience of about 723,710 people in northern and central Michigan.

"People are very supportive and appreciate the service," Grigaliunas said.

The center was originally located in the basement of Anspach Hall. The first station aired in 1967, according to Grigaliunas. He said PBS had been at its Broomfield location for two years.

Funding for PBS came from contributors and business sponsors. Grigaliunas said the number of contributors totaled approximately 17,000 and made up 45 percent of the PBS budget, which was $810,000 in the 1985 Fiscal year.

Businesses such as Michigan Consolidated Gas Company, would also sponsor the programming and receive credit on the air.

He said the stations employed about 55 CMU students during the school year and 32 professionals.

These people could work in several areas such as cameras, audio, directing, graphics, promotions, news, production and disc-jockeying. The center housed many state-of-the-art machines including a color copy machine, a typositor (typesetting machine), satellite receivers, weather and AP wire machines, sound mixers and a remote truck.

Rita Combest, Livonia sophomore, was employed by PBS during the 1985 Fall semester.

Combest said she was a board operator for WCMU and WCML FM stations. She said she also broadcasted the news and the CMU Public Radio Almanac which was a list of upcoming events in mid-northern Michigan.

"I average about 15 hours a week," said Combest. "I work Thursday evenings and Saturday mornings this semester but it fluctuates each semester," she said.

This was Combest's second semester at PBS.

She said she got the job by applying at the station. She did have previous experience during high school and from an internship with WJR radio in Detroit, she said

Combest said she hoped to do more news in the future, but said she enjoyed working at PBS.

"It's great experience. I am making connections and I see all aspects of broadcasting. I love my job," Corn best said.

Grigaliunas said because of PBS, the university became a household word in central and northern Michigan.

He proved that statement by pointing out the large number of awards PBS had won, which could be observed in the lobby of the Public Broadcasting Center.

Caption: The new broadcast building has much more room for PBS to grow than their older, outdated station had at Anspach Hall.