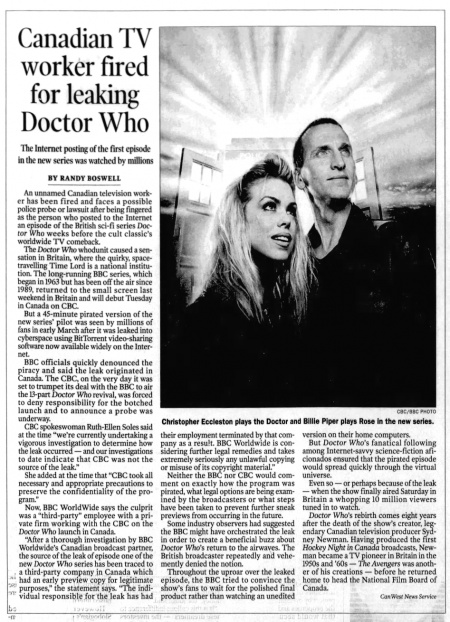 An unnamed Canadian television worker has been fired and faces a possible police probe or lawsuit after being fingered as the person who posted to the Internet an episode of the British sci-fi series Doctor Who weeks before the cult classic's worldwide TV comeback.

The Doctor Who whodunit caused a sensation in Britain, where the quirky, space-travelling Time Lord is a national institution. The long-running BBC series, which began in 1963 but has been off the air since 1989, returned to the small screen last weekend in Britain and will debut Tuesday in Canada on CBC.

But a 45-minute pirated version of the new series' pilot was seen by millions of fans in early March after it was leaked into cyberspace using BitTorrent video-sharing software now available widely on the Internet.

BBC officials quickly denounced the piracy and said the leak originated in Canada. The CBC, on the very day it was set to trumpet its deal with the BBC to air the 13-part Doctor Who revival, was forced to deny responsibility for the botched launch and to announce a probe was underway.

CBC spokeswoman Ruth-Ellen Soles said at the time were currently undertaking a vigorous investigation to determine how the leak occurred — and our investigations to date indicate that CBC was not the source of the leak."

She added at the time that "CBC took all necessary and appropriate precautions to preserve the confidentiality of the program."

Now, BBC WorldWide says the culprit was a "third-party' employee with a private firm working with the CBC on the Doctor Who launch in Canada.

"After a thorough investigation by BBC Worldwide's Canadian broadcast partner, the source of the leak of episode one of the new Doctor Who series has been traced to a third-party company in Canada which " had an early preview copy for legitimate purposes," the statement says. "The individual responsible for the leak has had their employment terminated by that company as a result. BBC Worldwide is considering further legal remedies and takes extremely seriously any unlawful copying or misuse of its copyright material."

Neither the BBC nor CBC would comment on exactly how the program was pirated, what legal options are being examined by the broadcasters or what steps have been taken to prevent further sneak previews from occurring in the future.

Some industry observers had suggested the BBC might have orchestrated the leak in order to create a beneficial buzz about Doctor Who's return to the airwaves. The British broadcaster repeatedly and vehemently denied the notion.

Throughout the uproar over the leaked episode, the BBC tried to convince the show's fans to wait for the polished final product rather than watching an unedited version on their home computers.

But Doctor Who's fanatical following among Internet-savvy science-fiction aficionados ensured that the pirated episode would spread quickly through the virtual universe.

Even so — or perhaps because of the leak — when the show finally aired Saturday in Britain a whopping 10 million viewers tuned in to watch.

Doctor Who's rebirth comes eight years after the death of the show's creator, legendary Canadian television producer Sydney Newman. Having produced the first Hockey Night in Canada broadcasts, Newman became a TV pioneer in Britain in the 1950s and '60s — The Avengers was another of his creations — before he returned home to head the National Film Board of Canada.