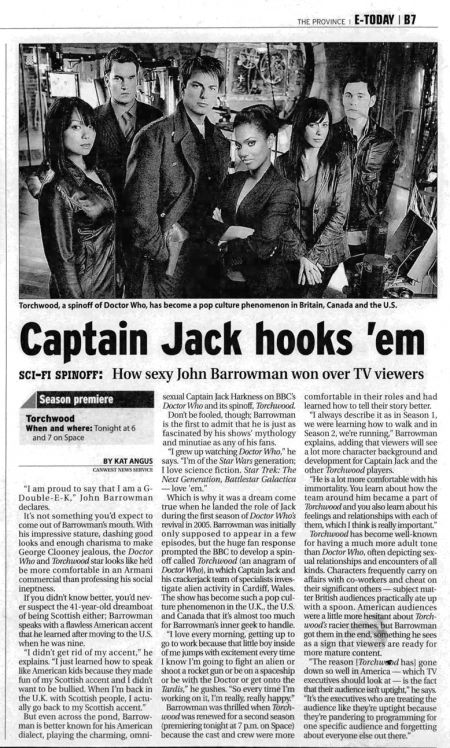 "I didn't get rid of my accent," he explains. "I just learned how to speak like American kids because they made fun of my Scottish accent and I didn't want to be bullied. When I'm back in the U.K with Scottish people, I actually go back to my Scottish accent."

But even across the pond, Barrowman is better known for his American dialect, playing the charming, omnisexual Captain Jack Harkness on BBC's Doctor Who and its spinoff, Torchwood.

Which is why it was a dream come true when he landed the role of Jack during the first season of Doctor Who's revival in 2005. Barrowman was initially only supposed to appear in a few episodes, but the huge fan response prompted the BBC to develop a spinoff called Torchwood (an anagram of Doctor Who), in which Captain Jack and his crackerjack team of specialists investigate alien activity in Cardiff, Wales. The show has become such a pop culture phenomenon in the U.K, the U.S. and Canada that it's almost too much for Barrowman's inner geek to handle.

"I love every morning, getting up to go to work because that little boy inside of me jumps with excitement every time I know I'm going to fight an alien or shoot a rocket gun or be on a spaceship or be with the Doctor or get onto the Tardis," he gushes. "So every time I'm working on it, I'm really, really happy"

Barrowman was thrilled when Torchwood was renewed for a second season (premiering tonight at 7 p.m. on Space) because the cast and crew were more comfortable in their roles and had learned how to tell their story better.

"I always describe it as in Season 1, we were learning how to walk and in Season 2, we're running," Barrowman explains, adding that viewers will see a lot more character background and development for Captain Jack and the other Torchwood players.

Torchwood has become well-known for having a much more adult tone than Doctor Who, often depicting sexual relationships and encounters of all kinds. Characters frequently carry on affairs with co-workers and cheat on their significant others — subject matter British audiences practically ate up with a spoon. American audiences were a little more hesitant about Torchwood's racier themes, but Barrowman got them in the end, something he sees as a sign that viewers are ready for more mature content.

"The reason [Torchwood has] gone down so well in America — which TV executives should look at — is the fact that their audience isn't uptight," he says. "It's the executives who are treating the audience like they're uptight because they're pandering to programming for one specific audience and forgetting about everyone else out there."