Caught in a time warp 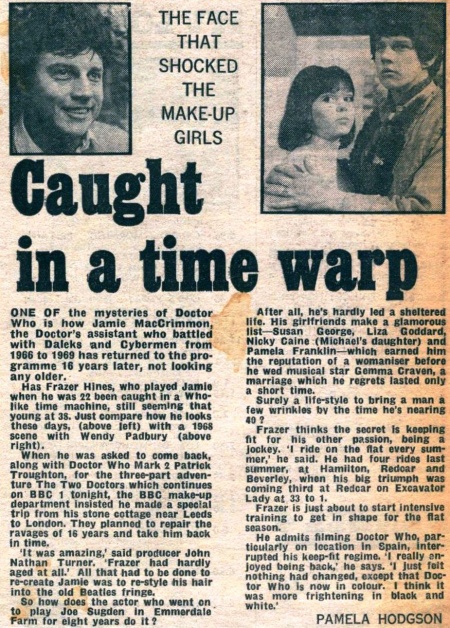 THE FACE THAT SHOCKED THE MAKE-UP GIRLS

ONE OF the mysteries of Doctor Who is how Jamie MacCrimmon, the Doctor's assistant who battled with Daleks and Cybermen from 1966 to 1969 has returned to the programme 16 years later, not looking any older.

Has Frazer Hines, who played Jamie when he was 22 been caught in a Who-like time machine, still seeming that young at 38. Just compare how he looks these days, (above left) with a 1968 scene with Wendy Padbury (above right).

When he was asked to come back, along with Doctor Who Mark 2 Patrick Troughton, for the three-part adventure The Two Doctors which continues On BBC 1 tonight, the BBC make-up department insisted he made a special trip from his stone cottage near Leeds to London. They planned to repair the ravages of 16 years and take him back in time.

'It was amazing,' said producer John Nathan Turner. 'Frazer had hardly aged at all.' All that had to be done to re-create Jamie was to re-style his hair into the old Beatles fringe.

So how does the actor who went on to play Joe Sugden in Emmerdale Farm for eight years do it ?

After all, he's hardly led a sheltered life. His girlfriends make a glamorous list—Susan George, Liza Goddard, Nicky Caine (Michael's daughter) and Pamela Franklin—which earned him the reputation of a womaniser before he wed musical star Comma Craven, a marriage which he regrets lasted only a short time.

Surely a life-style to bring a man a few wrinkles by the time he's nearing 49 ?

Frazer thinks the secret is keeping fit for his other passion, being a jockey. ride on the flat every summer,' he said. He had four rides last summer, at Hamilton, Redcar and Beterley, when his big triumph was coming third at Redcar on Excavator Lady at 33 to 1.

Frazer is just about to start intensive training to get in shape for the flat season.

He admits filming Doctor Who, particularly on location in Spain, interrupted his keep-fit regime, really enjoyed being back,' he says. 'I just felt nothing had changed, except that Doctor Who is now in colour. I think it was more frightening in black and white.'