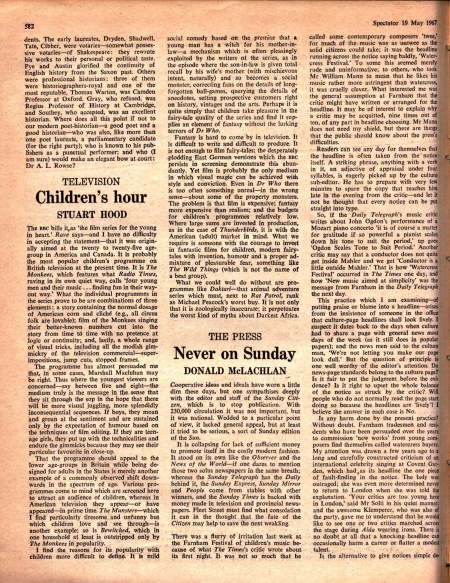 The BBC bills it as 'the film series for the young in heart.' Rave says—and I have no difficulty in accepting the statement—that it was originally aimed at the twenty to twenty-five age-group in America and Canada. It is probably the most popular children's programme on British television at the present time. It is The Monkees, which features what Radio Times, raving in its own quiet way, calls 'four young men and their music ... finding fun in their way-out way.' What the individual programmes in the series prove to be are combinations of three elements: a story containing the normal dosage of American corn and cliché (e.g., all circus folk are lovable); film of the Monkees singing their better-known numbers cut into the story from time to time with no pretence at logic or continuity; and, lastly, a whole range of visual tricks, including all the modish gimmickry of the television commercial—super-impositions, jump cuts, stopped frames.

The programme has almost persuaded me that, in some cases, Marshall Macluhan may be right. Thus where the youngest viewers are concerned—say between five and eight—the medium truly is the message in the sense that they sit through the sop in the hope that there will be more visual juggling, more splendidly inconsequential sequences. If boys, they moan and groan at the sentiment and are sustained only by the expectation of humour based on the techniques of film editing. If they are teenage girls, they put up with the technicalities and endure the gimmicks because they may see their particular favourite in close-up.

That the programme should appeal to the lower age-groups in Britain while being designed for adults in the States is merely another example of a commonly observed shift downwards in the spectrum of age. Various programmes come to mind which are screened here to attract an audience of children, whereas in American television they appear—or have appeared—in prime time. The Munsters—which I find particularly tiresome and unfunny but which children love and see through—is another example; so is Bewitched, which in one household at least is outstripped only by The Monkees in popularity.

I find the reasons for its popularity with Children more difficult to define. It is mild social comedy based on the premise that a young man has a witch for his mother-in-law—a mechanism which is often pleasingly exploited by the writers of the series, as in the episode where the son-in-law is given total recall by his wife's mother (with mischievous intent, naturally) and so becomes a social monster, correcting fans on the details of long-forgotten ball-games, querying the details of anecdotes, setting prospective customers right on history, vintages and the arts. Perhaps it is quite simply that children take pleasure in the fairy-tale quality of the series and find it supplies an element of fantasy without the lurking terrors of Dr Who.

Fantasy is hard to come by in television. It is difficult to write and difficult to produce. It is not enough to film fairy-tales; the desperately plodding East German versions which the BBC persists in screening demonstrate this abundantly. Yet film is probably the only medium in which visual magic can be achieved with style and conviction. Even in Dr Who there is too often something unreal—in the wrong sense—about some of the property monsters. The problem is that film is expensive; fantasy more expensive than realism; and the budgets for children's programmes relatively low. Where large sums are invested in production, as in the case of Thunderbirds, it is with the American (adult) market in mind. What we require is someone with the courage to invest in fantastic films for children, modern fairytales with invention, humour and a proper admixture of pleasurable fear, something like The Wild Things (which is not the name of a beat group).

What we could well do without are programmes like Daktari—that animal adventure series which must, next to Rat Patrol, rank as Michael Peacock's worst buy. It is not only that it is zoologically inaccurate; it perpetuates the worst kind of myths about Darkest Africa.