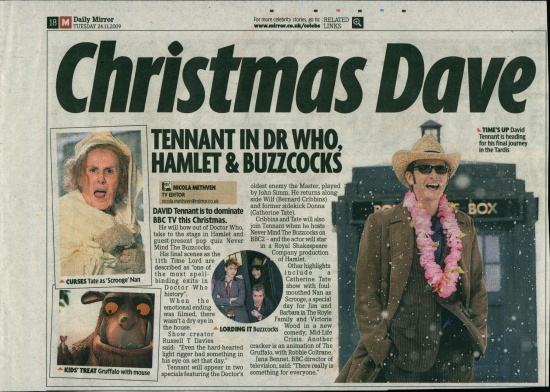 TENNANT IN DR WHO, HAMLET & BUZZCOCKS

DAVID Tennant is to dominate BBC TV this Christmas.

He will bow out of Doctor Who, take to the stage in Hamlet and guest-present pop quiz Never Mind The Buzzcocks. His final scenes as the 11th Time Lord are described as "one of the most spellbinding exits in Doctor Who history".

When the emotional ending was filmed, there wasn't a dry eye in the house.

Show creator Russell T Davies said: "Even the hard-hearted light rigger had something in his eye on set that day." Tennant will appear in two specials featuring the Doctor's oldest enemy the Master, played by John Simm. He returns alongside Wilf (Bernard Cribbins) and former sidekick Donna (Catherine Tate).

Cribbins and Tate will also join Tennant when he hosts Never Mind The Buzzcocks on BBC2 - and the actor will star in a Royal Shakespeare Company production of Hamlet.

Other highlights include a Catherine Tate show with foulmouthed Nan as Scrooge, a special day for Jim and Barbara in The Royle Family and Victoria Wood in a new comedy, Mid-Life Crisis. Another cracker is an animation of The Gruffalo, with Robbie Coltrane.

Jana Bennet, BBC director of television, said: "There really is something for everyone."