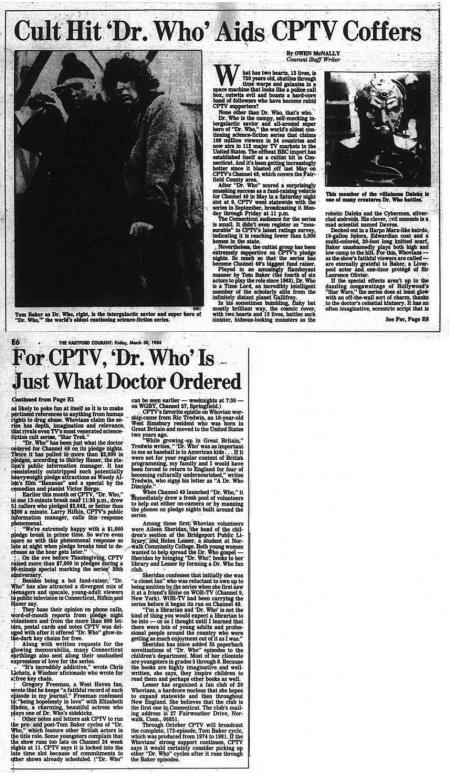 What has two hearts, 13 lives, is 750 years old, shuttles through time warps and galaxies in a space machine that looks like a police call box, outwits evil and boasts a hard-core band of followers who have become rabid CPTV supporters?

None other than Dr. Who, that's who.

Dr. Who is the campy, self-mocking interrgalactic savior and all-around super hero of "Dr. Who," the worlds' oldest continuing science-fiction series that claims 100 million viewers in 54 countries and now airs in 112 major TV markets in the United States. The offbeat BBC import has established itself as a cultist hit in Connecticut And it's been getting Increasingly batter since it blasted off last May on CPTV's Channel 49, which covers the Fairfield County area.

After "Dr. Who" scored a surprisingly smashing success as a fund-raising vehicle for Channel 49 in May on a Saturday night slot at 9, CPTV went statewide with the series in September, broadcasting it Monday through Friday at 11 p.m.

The Connecticut audience for the series is small. It didn't even register as "measurable" in CPTV's latest ratings survey, indicating it is reaching fewer than 5,000 homes in the state.

Nevertheless, the cultist group has been extremely supportive on CPTV's pledge nights. So much so that the series has become Channel 49's biggest fund raiser. Played in an amusingly flamboyant manner by Tom Baker (the fourth of six actors to play the role since 1963), Dr. Who is a Time Lord, an Incredibly intelligent member of the scholarly elite from the infinitely distant planet Gallifrey.

In his sometimes bumbling, flaky but mostly brilliant way, the cosmic rover. with two hearts and 13 lives, battles such sinister, hideous-looking monsters as the robotic Daleks and the Cybermen, silver-clad androids. His clever, evil nemesis is a mad scientist named Davros.

Decked out in a Harpo Marx-like hairdo, 10-gallon fedora, Edwardian coat and a multi-colored, 20-foot long knitted scarf, Baker unashamedly plays both high and low camp to the hilt. For this, Whovians — as the show's faithful viewers are called — are eternally grateful to Baker, a Liverpool actor and one-time protegé of Sir Laurence Olivier.

If the special effects aren't up to the denting mega-wattage of Hollywood's "Star Wars," the series does at least glow with an off-the-wall sort of charm, thanks to the doctor's celestial klutzery. It has an often imaginative, eccentric script that is as likely to poke fun at Itself as it is to make pertinent references to anything from hump rights to drug abuse. Whovians claim the series has depth, imagination and relevance that rivals even TV's most venerated science-fiction cult series "Star Trek."

"Dr. Who" has been Just what the doctor ordered for Channel 49 on its pledge nights. Twice it has pulled in more than $2,000 in pledges, according to Shirley Haner, the station's public information manager. It has consistently outstripped such potentially heavyweight pledge attractions as Woody Allen's film "Bananas" and a special by the comedian and pianist Victor Borge.

"We're extremely happy with a $1,000 pledge break In prime time. So we're even more so with this phenomenal response so lite at night when pledge breaks tend to decrease as the hour gets later."

On the eve before Thanksgiving, CPTV raised more than $7,000 in pledges during a 90-minute special marking the series' 20th anniversary.

Besides being a hot fund-raiser, "Dr. Who" has also attracted a divergent mix of teenagers and upscale, young-adult viewers to public television In Connecticut, Rifkin and Haner say.

They base their opinion on phone calls, word-of-mouth reports from pledge night volunteers and from the more than 600 letters, postal cards and notes CPTV was deluged with after It offered "Dr. Who" glow-in-the-dark key chains for free.

Along with written requests for the glowing memorabilia, many Connecticut earthllngs also sent along their unabashed expressions of love for the series.

"It's incredibly addictive," wrote Chris Lichatz, a Windsor aficionado who wrote for a free key chain.

Gregory Freeman, a West Haven fan, wrote that he keeps "a faithful record of each episode in my journal." Freeman confessed to "being hopelessly in love" with Elizabeth Sladen, a charming, beautiful actress who plays one of Dr. Who's sidekicks.

Other notes and letters ask CPTV to run the pre- and post- Tom Baker cycles of "Dr. Who," which feature other British actors in the title role. Some youngsters complain that the show runs too late on Channel 24 week nights at 11. CPTV says it is locked into the late time slot because of commitments to other shows already scheduled. ("Dr. Who" can be seen earlier — weeknights at 7:30 — on WGBY, Channel 57, Springfield.)

CPTV's favorite epistle on Whovian worship came from Ric Tredwin, an 18-year-old West Simsbury resident who was born in Great Britain and moved to the United States two years ago.

"While growing up in Great Britain," Tredwin writes," 'Dr. Who' was as important to me as baseball is to American kids ... If it were not for your regular content of British programming, my family and I would have been forced to return to England for fear of becoming culturally undernourished," writes Tredwin, who signs his letter as "A Dr. Who Disciple."

When Channel 49 launched "Dr. Who," it immediately drew a fresh pool of volunteers to help out either on-camera or by manning the phones on pledge nights built around the series.

Among these first Whovian volunteers were Aileen Sheridan, the head of the children's section of the Bridgeport Public Library, and Helen Lesser, a student at Norwalk Community College. Both young women wanted to help spread the Dr. Who gospel — Sheridan by bringing "Dr. Who' books to her library and Lesser by forming a Dr. Who fan club.

Sheridan confesses that initially she was "a closet fan" who was reluctant to own up to being smitten by the series when she first saw it at a friend's home on WOR-TV (Channel 9, New York). WOR-TV had been carrying the series before it began Its run on Channel 49.

"I'm a librarian and 'Dr. Who' is not the kind of thing you would expect a librarian to be into — or so I thought until I learned that there were lots of young adults and professional people around the country who were getting as much enjoyment out of it as I was."

Sheridan has since added 35 paperback novelizations of "Dr. Who" episodes to the children's department. Most of her clientele are youngsters in grades S through 8. Because the books are highly imaginative and well- written, she says, they Inspire children to read them and perhaps other books as well.

Lesser has organized a fan club of 20 Whovians, a hardcore nucleus that she hopes to expand statewide and then throughout New England. She believes that the club is the first one it Connecticut. The club's mailing address is 27 Fairweather Drive, Norwalk, Conn., 06851.

Through October CPTV will broadcast the complete, 172 episode, Tom Baker cycle, which was produced from 1974 to 1981. If the Whovians' strong support continues, CPTV says it would certainly consider picking up other "Dr. Who" cycles alter it runs through the Baker episodes.

Caption: Tom Baker as Dr. Who, right, to the intergalactic savior and super hero of "Dr. Who,'" the world's oldest continuing science-fiction series.

Caption: This member of the villainous Daleks is one of many creatures Dr. Who battles.