Daleks are back .. playing it for laughs 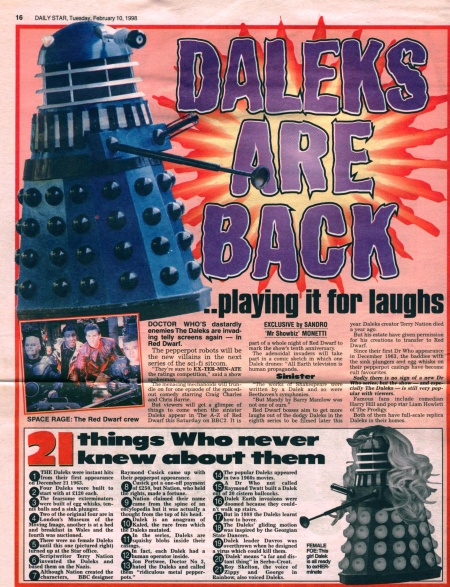 The pepperpot robots will be the new villains in the next series of the sci-fi sitcom.

"They're sure to EX-TER-MIN-ATE the ratings competition," said a show spokesman.

The menacing mechanoids will trundle on for one episode of the spaced-out comedy starring Craig Charles and Chris Barrie.

But viewers will get a glimpse of things to come when the sinister Daleks appear in The A-Z of Red Dwarf this Saturday on BBC2. It is part of a whole night of Red Dwarf to mark the show's tenth anniversary. The adenoidal invaders will take part in a comic sketch in which one Dalek drones: "All Earth television is human propaganda.

"The works of Shakespeare were written by a Dalek and so were Beethoven's symphonies.

"But Mandy by Barry Manilow was not one of ours."

Red Dwarf bosses aim to get more laughs out of the dodgy Daleks in the eighth series to be filmed later this year. Daleks creator Terry Nation died a year ago.

But his estate have given permission for his creations to transfer to Red Dwarf.

Since their first Dr Who appearance in December 1963, the baddies with the sink plungers and egg whisks on their pepperpot casings have become cult favourites.

Sadly there is no sign of a new Dr Who series, but the show — and especially The Daleks — is still very popular with viewers.

Both of them have full-scale replica Daleks in their homes.

21 things Who never knew about them

Caption: FEMALE FOE: This girl Dalek is all ready to exHER-minate