Daleks on the Move 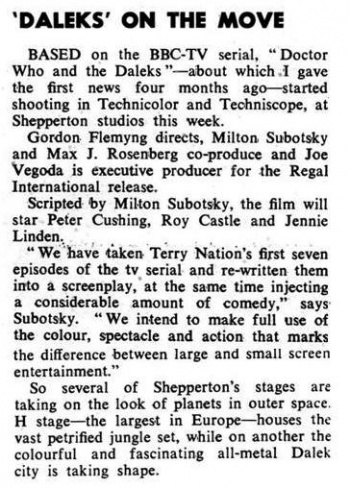 BASED on the BBC-TV serial. "Doctor Who and the Daleks" -- about which I gave the first news four months ago—started shooting in Technicolor and Techniscope, at Shepperton studios this week.

"We have taken Terry Nation's first seven episodes of the tv serial and re-written them into a screenplay, at the same time injecting a considerable amount of comedy," says Subotsky. "We intend to make full use of the colour, spectacle and action that marks the difference between large and small screen entertainment."

So several of Shepperton's stages are taking on the look of planets in outer space. H stage—the largest in Europe—houses the vast petrified jungle set, while on another the colourful and fascinating all-metal Dalek city is taking shape.