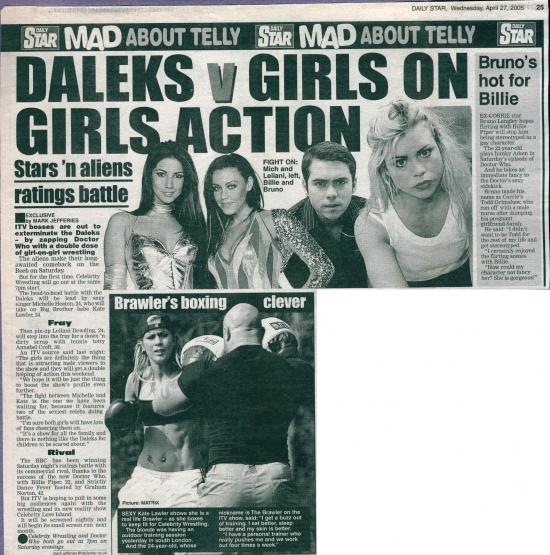 The aliens make their long-awaited comeback on the Beeb on Saturday.

But for the first time, Celebrity Wrestling will go out at the same 7pm start.

The head-to-head battle with the Daleks will be lead by sexy singer Michelle Heaton, 24, who will take on Big Brother babe Kate Lawler, 24.

Then pin-up Leilani Dowding, 24, will step into the fray for a down 'n dirty scrap with tennis totty Annabel Croft, 39.

An ITV source said last night: "The girls are definitely the thing that is attracting male viewers to the show and they will get a double helping of action this weekend. "We hope it will be just the thing to boost the show's profile even further.

"The fight between Michelle and Kate is the one we have been waiting for, because it features two of the sexiest celebs doing battle.

"I'm sure both girls will have lots of fans cheering them on.

"It's a show for all the family and there is nothing like the Daleks for children to be scared about."

The BBC has been winning Saturday night's ratings battle with its commercial rival, thanks to the success of the new Doctor Who, with Billie Piper, 22, and Strictly Dance Fever hosted by Graham Norton, 42.

But ITV is hoping to pull in some big audiences again with the wrestling and its new reality show Celebrity Love Island.

It will be screened nightly and will begin its small screen run next month.

Celebrity Wrestling and Doctor Who both go out at 7pm on Saturday evenings.

EX-CORRIE star Bruno Langley hopes flirting with Billie Piper will stop him being stereotyped as a gay character.

The 22-year-old plays honky Adam in Saturday's episode of Doctor Who.

And he takes an immediate fancy to the Doctor's sexy sidekick.

Bruno made his name as Corrie's Todd Grimshaw, who ran off with a male nurse after dumping his pregnant girlfriend Sarah. He said: "I didn't want to be Todd for the rest of my life and get stereotyped. "I certainly enjoyed the flirting scenes with Billie.

"How could my character not fancy her? She is gorgeous!"